The international, far-right terrorist group “NSC 131” communicates on Telegram. Here, members pose with a swastika flag in the woods. (The editors have decided to blur the swastikas.) (Quelle: Screenshot)

While the discovery of a far-right group within a police force caused a stir in North Rhine-Westphalia, at almost the exact same time last Wednesday morning, on September 16th, 2020, police searched six homes in the federal state of Hesse. In a press release, the Ministry of the Interior referred to persons who “had already attracted attention due to politically motivated far-right crime”. Chat histories seen by Belltower.News now confirm the existence of an online organised far-right extremist network that is active beyond the borders of Germany.

One of the suspects at the centre of the police raid is said to belong to the far-right extremist group “NSC 131”. The code “NSC” stands for “Nationalist Social Club” and the numbers “131” correspond to the position of letters in the alphabet, spelling the abbreviation “ACA” for “Anti-Communist Action”. The group “NSC 131” was founded at the beginning of this year (2020). Some of the group’s members are former members of other far-right terrorist groups, such as “The Base” (see The Guardian), which planned terrorist attacks to incite a “race war”, or “Combat 18”, the military arm of the “Blood & Honour” network, which is also active in Germany.

“NSC 131” is recruiting new members in the USA and presents itself as a protective group for “whites”, especially concerning the Black Lives Matter protests. Members have posted photos of themselves giving the Hitler salute and posing with weapons and the group’s merchandise. Branches have formed in the USA and are growing rapidly. The group appears to use chat groups as their main recruitment tool. On August 20th, 2020, the group posted a picture in their info channel on Telegram suggesting the establishment of an “NSC 131” group in Germany.

Internet chat histories seen by Belltower.News confirm the suspicion that the group has expanded into Germany. The German group remains small, but current members appear enthusiastic about its growth. A user posting under the alias “Paulo” opened the Telegram group with the simple message: “We are only at the beginning and are in the process of building up to find people and network.” 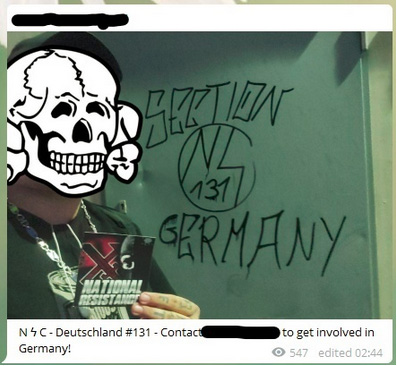 The group members are motivated. After only a few days, a picture of freshly printed stickers was posted in the group. According to the chat, 5,000 stickers were made for distribution in both West and East Germany. Although the group’s work so far consists mainly of merchandising, members’ attitudes and the group’s networking displays a clear propensity for violence. Members shared a propaganda video where the names of the victims of far-right violence and far-right terrorist attacks were burned. The chat also included explicit hatred of Jews. Shortly after the group’s founding, a picture was posted displaying four shirtless men, alleged members of “NSC 131’s” German chapter, with the caption, “NSC Deutschland boys met up and patrolled their district looking for reds” – referring to hunting perceived communists or left-wingers.

The police raids paint a clearer picture of the danger this group poses. In their press release, the police stated that they seized “weapons and Nazi paraphernalia” (the possession of certain Nazi paraphernalia is illegal in Germany). The responsible investigative unit, “Besondere Aufbauorganisation Hessen” (BAO), often takes on investigations into the possession of illegal firearms as these often lead to the discovery of right-wing paraphernalia, which exposes those in question as far-right criminals and thus leads to their monitoring by police.

Over the course of researching the group, further information about the group’s founder “Paulo” has come to light. On his Instagram profile, “Paulo” poses masked in the city centre of Frankfurt wearing far-right clothing brands. On his elbow, he sports the “Black Sun”, a common neo-Nazi symbol, and his friends are wearing “Kampf der Nibelungen” shirts. The “Kampf der Nibelungen” is a neo-Nazi martial arts fixture that serves as a networking event for the violent far-right extremist scene. Another post from a propaganda account on Instagram suggests that “Paulo” at least partially pays merchandise printing expenses by distributing far-right stickers.

Another member of the German “NSC 131” group is active in another international Telegram group chat that distributes illegal symbols, videos glorifying violence and prohibited neo-Nazi music. There, members share posts glorifying far-right violence alongside propaganda for the far-right terrorist organisation “National Socialist Order” (see Vice), a successor to the far-right terrorist organisation “Atomwaffen Division”. In the group are at least 40 German members who claim to be active within and well connected to biker groups and neo-Nazi structures.

Close contact between groups in the USA and Germany

A member in the Telegram group using the alias “131 guy” appears to be the bridge to neo-Nazi groups in the USA. “131 guy” arranged contact with German neo-Nazis and repeatedly encouraged the German branch to become active. For example, he offered to take design suggestions for German stickers to be developed by a graphic designer. Far-right groups such as this can be understood as umbrella organisations that connect neo-Nazi groups internationally but allow them to maintain their autonomy when it comes to action. The concept of “leaderless resistance” is an established aspect of far-right terrorist strategy and is intended to allow neo-Nazi groups to network while keeping their autonomy.

The Amadeu Antonio Foundation’s monitoring project “de:hate” has already issued warnings about the growing presence of Germans in terror-related communities on imageboards and in Telegram groups: “These online networks have resulted in four terrorist attacks worldwide in 2019,” warns project manager Miro Dittrich. “The fact that members of ‘NSC131’ are active here and have already established a German branch of a new group from the USA in such a quick amount of time is evidence of a concrete threat and shows that the terrorist attack in Halle was not an unexpected exception to the rule.”

According to the chat history, the “NSC 131 Deutschland” group was abruptly dissolved on the morning of Wednesday, September 16th, 2020. One member wrote: “The reason is the raids in the Wiesbaden area”. Evidently, there is a direct connection to the six homes searched early in the morning. Hessian Interior Minister Peter Beuth said: “We will continue putting pressure on the far-right scene and let deeds speak for themselves in the fight against right-wing extremism”. To what extent the raids were able to prevent the formation of a new far-right extremist or terrorist group remains to be seen. So far, the responsible authorities have not responded to Belltower.News’ request for comment. The question also remains open as to whether the investigations will be coordinated with international security authorities, as a merely local investigation would not be able to capture the scope of the international far-right extremist and far-right terrorist network.

The black-white-red flag of the German Reich is a favourite among Nazis old and new. Most recently, it has become a permanent fixture at demonstrations ostensibly against the German government’s measures to fight the Covid19 pandemic. But what exactly is so problematic about this flag and what does the law say in Germany? An overview. 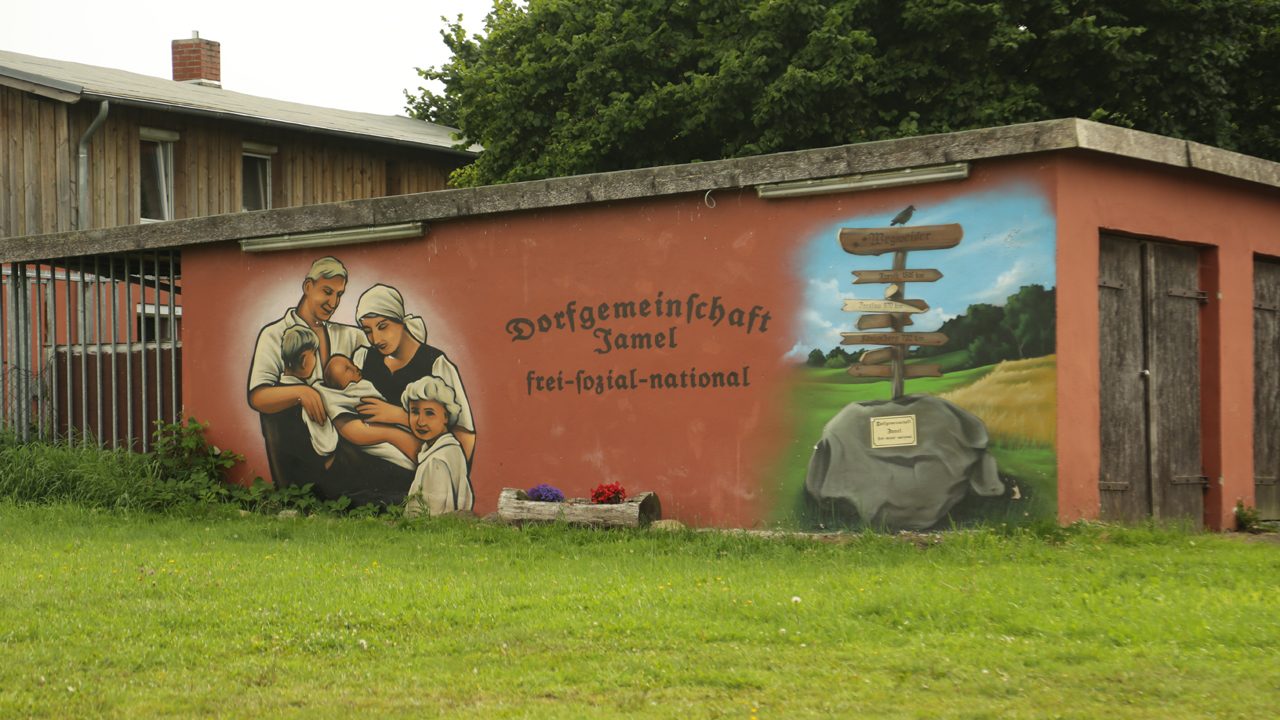 For years, the far right has been trying to gain a foothold in rural areas across Germany. According to government estimates, 146 properties belong to the scene. However, the actual number is almost certainly much higher. An overview of far-right properties in Germany – and what neighbours can do to combat this phenomenon.