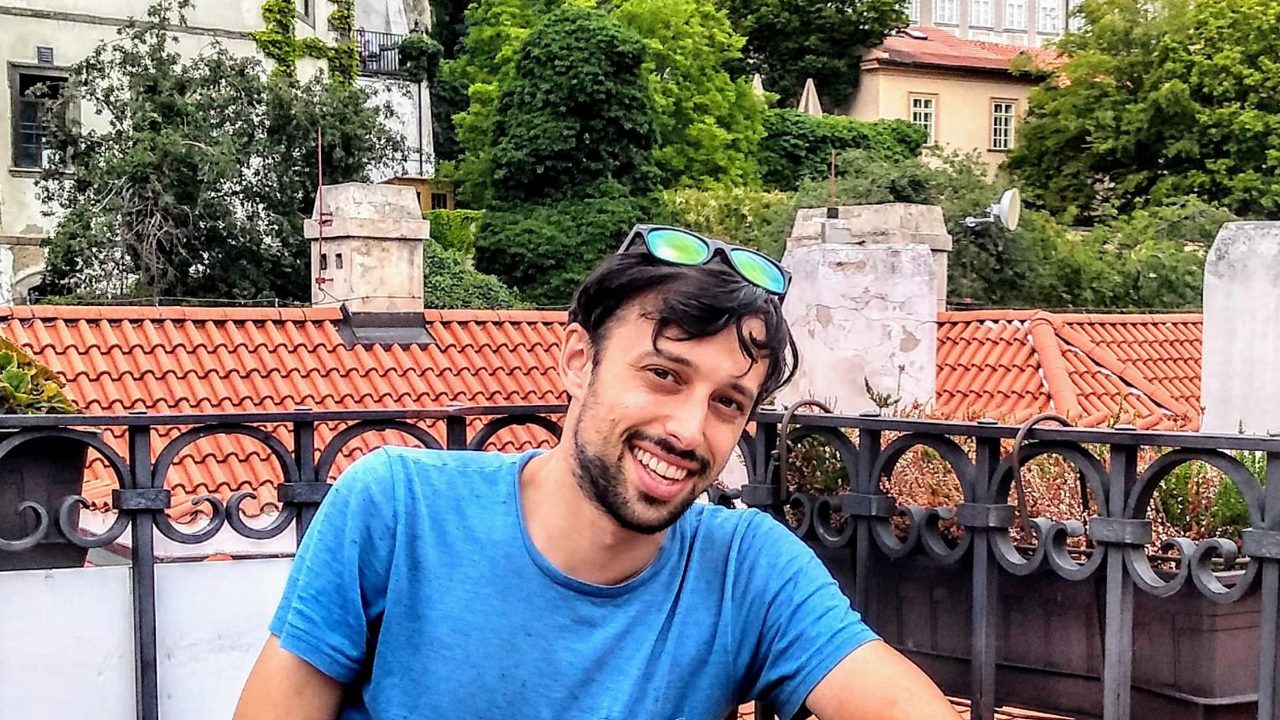 Ezra Waxman is one of 43 co-plaintiffs in the trial against the far-right Halle-attacker. (Quelle: Private)

Ezra Waxman was born and raised in Boston, Massachusetts, USA. After school he moved to Israel and finished his masters and PhD in Rehovot and Tel Aviv. One and a half years ago, he moved to Germany to begin post-doctoral studies in mathematics. As part of the “Base Berlin” group Ezra was a guest at the Halle synagogue during the attack.

On Yom Kippur at October 9th 2019, an armed assailant* attacked a synagogue in Halle and the nearby kebab shop “Kiez Döner”, murdering two people and injuring several others. On July 21st, the trial against him began in the city of Magdeburg.

Ezra Waxman: For me, this attack was first and foremost a religious experience. Specifically, I experienced it through the lens of Yom Kippur and the religious motifs of the day. Yom Kippur is a day like no other and the energy is just completely different than that of any other day in the year. The classical religious imagery of Yom Kippur is intensely dramatic: that of a heavenly court, deciding between life and death, for each and every individual on earth. We don’t eat or drink for the entirety of Yom Kippur. The only thing we’re meant to do all day is pray.

The attack felt like an unwelcome interruption of these prayers. After some initial confusion, once we started to realise that something was actually very wrong, people responded by trying to find ways in which to be helpful – though it was not necessarily completely clear what, exactly, needed to be done. I also remember being pleasantly struck by how calm and collected everyone around me seemed to be. After quickly seeking safety upstairs, I saw my own “contribution” as simply trying to stay calm, and to project that calmness outward, in order to maintain and facilitate a collective sense of composure amongst the group as a whole. I even cracked one or two dumb jokes. Others were maybe more successful in finding actual, more practical ways to be useful.

After the immediate threat had passed, and the interruption was deemed over, we simply returned to the prayer service precisely where we had left off before. At the time, this certainly felt like the most natural thing to do. I don’t think anyone bothered to even question it. After all, this was Yom Kippur.

We continued the service for another few hours, before the police decided to evacuate us to a nearby hospital. Upon arrival, we continued our prayers. I’m not sure what I knew factually at this point, as there had been so many conflicting rumours floating around about what had happened. But certainly by the time we were evacuated to the hospital, it was clear that whatever had happened was very “big”. Naturally, we then just channelled that “big-ness” directly into our final round of prayers. The concluding Neilah prayer service at the hospital was the most incredible prayer service of my entire life. I am grateful to the police officers in Halle, to the lovely medical staff at the hospital, and to Rabbi Jeremy Borovitz, for enabling us to continue our prayers unabated, until their proper completion. Just try to imagine being immersed in a religious trance, and then having God knock on the door to miraculously save your life. That’s pretty much how I experienced last year’s Yom Kippur.

The morning afterwards already felt completely different than the previous day. By then, I had recalled my experience to my family, and also understood, clearly, that two people in this attack had been killed. The next few weeks were then a process of drawing emotional support from close friends, specifically, from fellow survivors of the attack. Over the course of the next few months, I also began to slowly piece together the political dimensions of this attack; namely, that it emerged within the context of several wider public discourses about online radicalisation, the rise of the far-right, gun control and synagogue security. I’ve since felt a sense of responsibility to better inform myself about these various discussions, even though I’m not normally a fan of politics.

Initially, I decided to become a co-plaintiff because I was curious to learn more about who the attacker was, about what he thinks and why. At some point I was also intrigued by the idea of trying to personally get through to the perpetrator: especially because the main theme of Yom Kippur is repentance, or as we call it, teshuva. Unfortunately, those initial hopes were probably a bit too naive on my part, given the emotionally stunted attitudes which he has displayed throughout the trial. I’m now quickly coming to realise that he’s probably just not worth any more of my time. Nonetheless, being a co-plaintiff has enabled me to at least learn a bit more about his personal story and upbringing, and what impact that had on his radicalisation and ideology. Here, his mother seems to have played a key role. In some of the court documents, she appears to have a creative tendency to scapegoat and project blame onto “the other”, rather than owning her own responsibilities. As they say: the apple doesn’t fall very far from the tree.

There is also the aspect of Jewish family history and collective memory. Personally, I am someone who wishes to define my Jewish identity through creative, Jewish content: such as Jewish music, Torah wisdom or Hebrew and Yiddish language. Antisemitism has always felt like an annoying distraction from all that to me. Coming from a family of Holocaust survivors, I often found myself pushing back against certain inter-generational traumas and fears which had clearly been shaped by antisemitism. And now I find myself in a situation where antisemitism has shaped my first year living in Germany quite significantly. While on the one hand I find this frustrating, on the other hand it offers me an opportunity to better accomplish what I actually wish to accomplish here: I want to use my own Jewish identity and my own Jewish values to contribute to the colour and soul of the very rich cultural playing field that already exists here in Germany today.

The trial also allows me to express gratitude to God for granting me the gift of life. Judaism is timeless, and it’s message for humanity, that human life is sacred, is timeless. Moreover, the Jewish people are an eternal nation, and we will always find ways to survive. The attacker likens us to a virus. What this actually means is that we are an incredibly resilient people; and that if you try to kill us, we just come back stronger than ever before. What hate crimes do manage to accomplish, though, is to wreak havoc onto the societies from which they emerge. In this respect, I would like to express my deepest sympathies for the people of Saxony Anhalt, who unjustly suffered at the hands of this attacker.

It is my hope that the attacker remains in jail until the day in which he is no longer a threat to this society.

Further information on the trial:

Together with NSU-Watch, the VBRG documents the trial in German, English and Russian, the initiative democ publishes reports in English, German and Hebrew. On the blog halle-prozess-report.de information, reports and impressions are published by the lawyers and their co-plaintiffs with support from activists and people that were impacted by the Halle attack.

A collective of international artists and researches in collaboration with nsu-watch created an interactive web platform named Global White Supremacist Terror in which they visually describe the offline and online activities of the shooter in Halle from the start of his attack to his final arrest – and chronologize other separate, but connected, instances of far-right violence in cities like Oslo, Christchurch, Poway, El Paso, and Hanau over the last several years.

* At the beginning of the trial, a group of co-plaintiffs published a joint declaration in which they have called on media representatives not to mention the attacker’s name to deny him a platform. We have respected this wish in this interview. 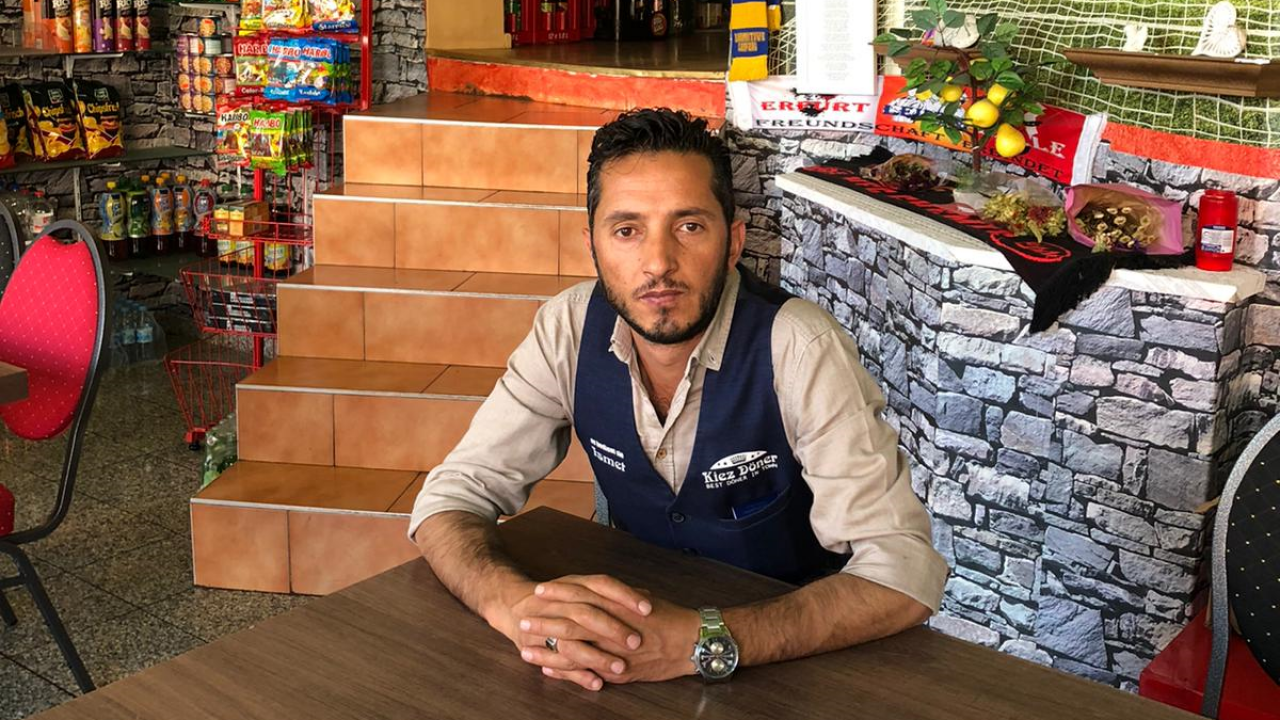 Max Privorozki is president of the Jewish Community in Halle and one of 43 plaintiffs in the trial against the far-right and antisemitic Halle shooter. A discussion about community work after the attack, Privorozki’s own role as a co-plaintiff and the challenges of security measures for Jewish communities.