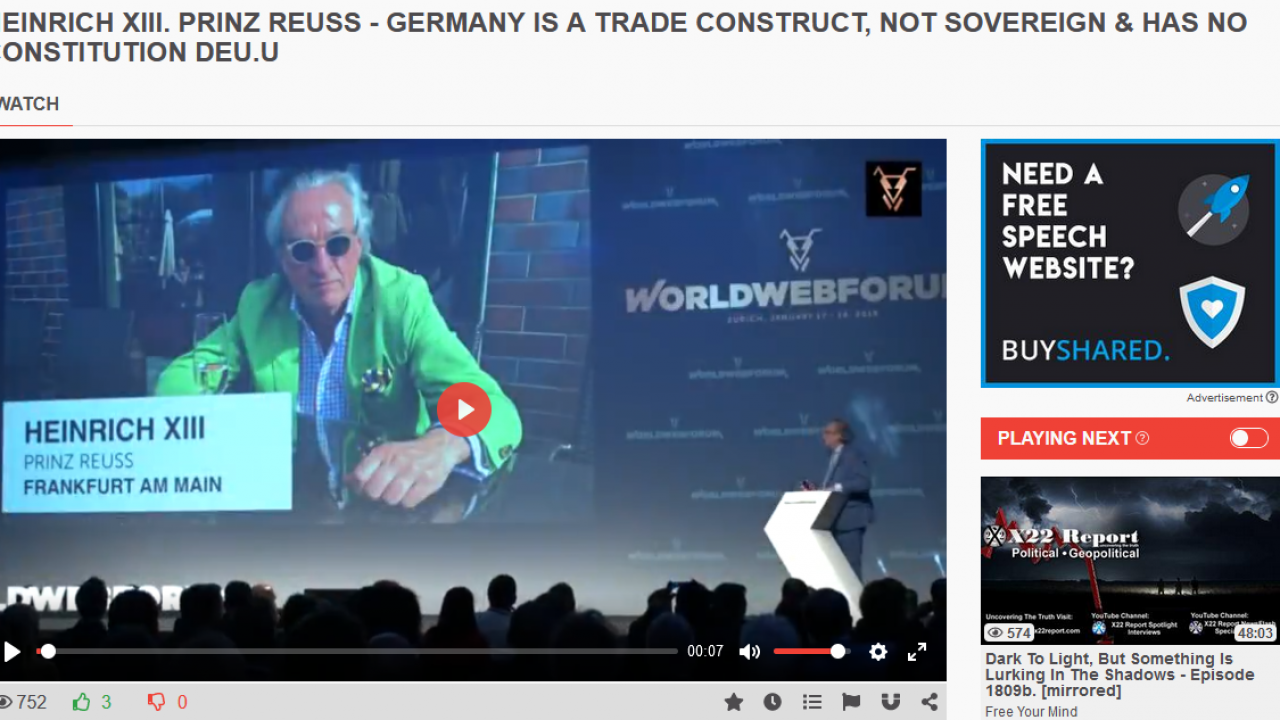 “Prince” Heinrich XIII of Reuss as speaker: "Experience the rise and fall of the blue-blooded elite". Conspiracy channels share videos like these on Bitchute, Odysee, and YouTube. (Quelle: Screenshot from Bitchute)

Reichsbürgers want to see parliamentary democracy in Germany end – because they regard it as an unjust consequence of World War II. Given that the Reich no longer had a government when Germany capitulated, there was never a “peace treaty”; instead of a constitution, Germany has a what it calls its Basic Law (see: Belltower.News). Reichsbürgers say they would have regarded the German monarchy of the imperial Kaiserreich as a negotiating partner for peace treaties and some of them would like to see the monarchy return even today. It should be no surprise that members of Germany’s aristocracy also support that idea. The Reichsbürger network that unraveled with the nationwide raids on 7 December 2022 included one of them among its leaders: the man who goes by the name “Prince Heinrich XIII of Reuss”, despite the fact that Germany no longer has any princes. He is a 71-year-old real estate agent and anyone who reads his effusions on the internet would recognize him as an enemy of democracy and a supporter of Reichsbürger ideology.

“Prince” Heinrich XIII comes from a family that can be traced back to the Middle Ages in Germany – even if he goes beyond that on YouTube and claims ancestors “in the year 900 AD”. The Reuss family is documented as including governors in the 12th century, lords in the 14th century, counts in the 17th century, and imperial princes in the 18th century. Until the German Revolution in 1918, their princely house ruled over territories in what is now the state of Thuringia, where some members of the Reuss family had continued to rule under the Kaiserreich: the family’s older line near the town of Greiz and the younger line in its principality near the city of Gera. The last active regent was “Hereditary Prince Heinrich XLV”, an enthusiastic Nazi Party member and soldier in the Nazi-era German army. He never married and had no children of his own, but he adopted one son, who he named Heinrich (Harry) I. Harry then married a relative, Woizlawa-Feodora, with whom he had six children, including the thirteenth Heinrich, now implicated in a planned coup. The family lived in Oberstein Castle in Gera, but fled to the town of Büdingen in the state of Hesse in the summer of 1945.

… lives in the past

After the Berlin Wall fell, the “princely family” – above all, the matriarch Woizlawa-Feodora – demanded that the family residences in Gera be returned to them. Among the property they claimed were a building known as the Princes’ House, a park called the Kitchen Garden, and various residential buildings. The basis for the family’s argument that these should all be returned was that the Nazi sympathiser and “hereditary prince” was also a British citizen and therefore could not have been expropriated (see: LokalTV Gera). But because the family was short on evidence that Heinrich XLV was actually British, the property was not returned to them, apart from a few items of décor, which the family auctioned off. A portion of the proceeds went to the UFO cult Fiat Lux and its leader Uriella, an associate of the family matriarch. It turns out that they are not new to conspiracy-driven religious affiliations.

Yet Heinrich XIII, the Reichsbürger in the family, was a bit too much. That became public knowledge in August 2022, when the “prince” was in his home town of Bad Lobenstein to meet with the independent, but right-leaning mayor Thomas Weigelt. Weigelt attacked a local journalist who wanted to document the meeting, and a representative of the “Princely House of Reuss”, yet another Heinrich (Heinrich XIV), later stated that Heinrich XIII is “sometimes a confused man who gets taken in by crazy conspiracy theories” and who left the family unit 14 years ago (see: mdr).

In return, “Prince” Heinrich XIII found new friends in the Reichsbürger scene. They admired his long-standing commitment to restoring the monarchy – and his explicit opposition to democracy. Letters written by the thirteenth Heinrich are available in Reichsbürger groups and on QAnon channels that begin dramatically with: “For me as well, today is a day of despair, as the state simulation still has the upper hand.” Photos of the 71-year-old show him in public with the air of a well-groomed, elegant gentleman who evidently sought to have a voice in politics in a variety of ways – but always with a Reichsbürger background. For instance, he indicated that he had been in Moscow in 2020 to speak with representatives of the “Allies” about the lack of a peace treaty – but the “anticipated support” had “failed to materialise”.

That’s why he said he needed “patriots” to be able to fulfil his vision “of recovering a federated state from the Kaiserreich”. He also identified who he thought might stand in his way: “The danger in the deep state allies’ plan is a monarchy of allies by the grace of Georg Friedrich, Prince of Prussia. That would be BRD 2.0,” using the German acronym for today’s actually existing Federal Republic of Germany. All of which is to say that he senses royal competition with better contacts with the “deep state”, a coded term used by conspiracy theorists for an imagined worldwide Jewish conspiracy. But he doesn’t stop there: “I need – the support of patriots (visible) and – of the three Allies (US, Russia, UK).  If I am not backed in my statehood by the Allies, the things the BRD corporation will do to me………” Heinrich XIII leaves the rest to the reader’s imagination. Incidentally, Heinrich’s partner Vitalia B., who is from Russia and was arrested as one of the conspirators’ supporters, allegedly did establish contact with the Russian government.

The thirteenth Heinrich found patriots who support his fantasies on the internet, among other places. In conspiracy-oriented wikis and Telegram channels, the prince not only found approval, but also supporters who wanted to help violently overthrow the government – and who had the weaponry to do it. In the “Patriot Union Channel” on Telegram, user “Kaisertreu” (meaning: “faithful to the Kaiser”) commented that “There’s always a way to spoil the fun these people are having with their borrowed power. Do what you need to do. Be the pain.” In the form of both letters and videos, “Prince” Heinrich XIII’s tirades were shared assiduously on that channel and others on Telegram, like “Patriotswarrior” and “Patriots Union” (all of these have now been taken down).

In hateful tirades against the communists who expropriated his family, the videos he posted on YouTube and Bitchute in 2019 address the pain that Germany allegedly suffered after the end of the monarchy. He claims that a “principality of Reuss” would have been “manageable and clear”, stating that “if something wasn’t going well, you approached the prince”. Heinrich XIII has little use for democratic structures: he believes that separation of powers is “an illusion” and that Germany is a “tributary vassal state”. He also claims that “representatives of the Rothschild dynasty” were behind the French Revolution for the purpose of abolishing monarchy. The same goes for the October Revolution in Russia. He says that Hitler also had financial backing from the US, which was guided by a Jewish conspiracy to “promote the dispersal of the Jewish population”. There is nothing more antisemitic than blaming National Socialism and the Holocaust on Jews.

A council for their own state structures

As a reward for all that hate and conspiratorial thinking dressed up as aristocracy, “Prince” Heinrich XIII was allegedly made chairman of the central “council” of the Reichsbürger group. The council was to be in charge of “planning the construction of their own state structures” after “the intended takeover” (see: Die Welt). For that reason, he was arrested on Wednesday in Frankfurt, where his offices are located, on suspicion of being the network’s ringleader. He also owns a neo-Gothic hunting lodge called Weidmannsheil, which, in keeping with his status, he made available to the Reichsbürgers so they could plan their network meetings for their “revolution”. The end result was to be a “principality of Reuss”. But for now, there is only jail. 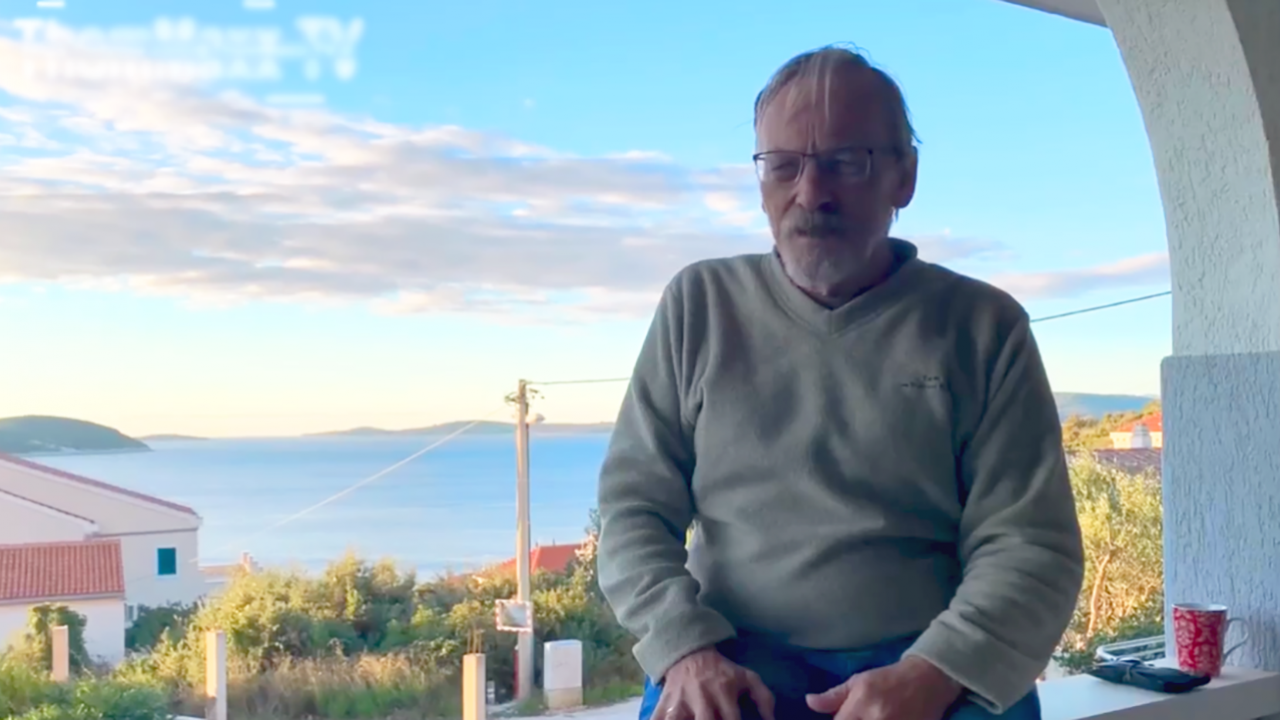 A “prince”, a former AfD Bundestag representative and judge, a former police chief superintendent, and a former colonel in the… 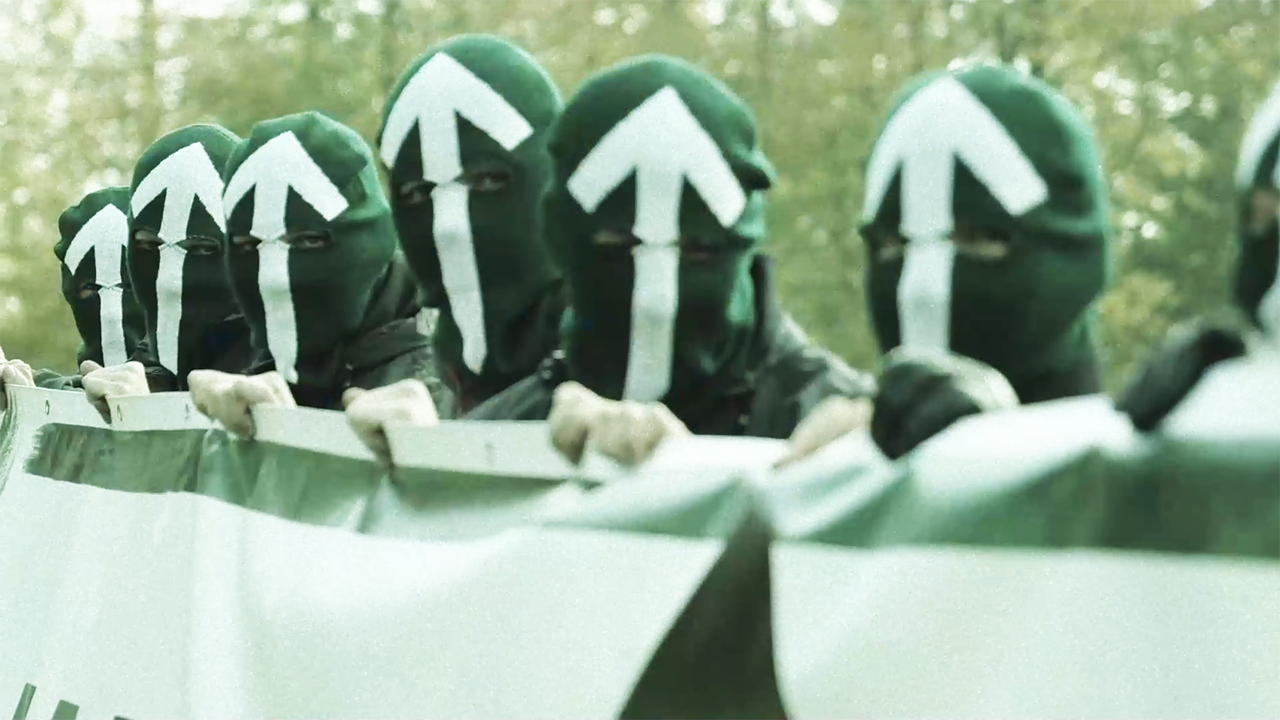 The Swiss group Junge Tat (Young Action) presents itself as a hip, Instagramable youth movement into hiking and MMA. But… 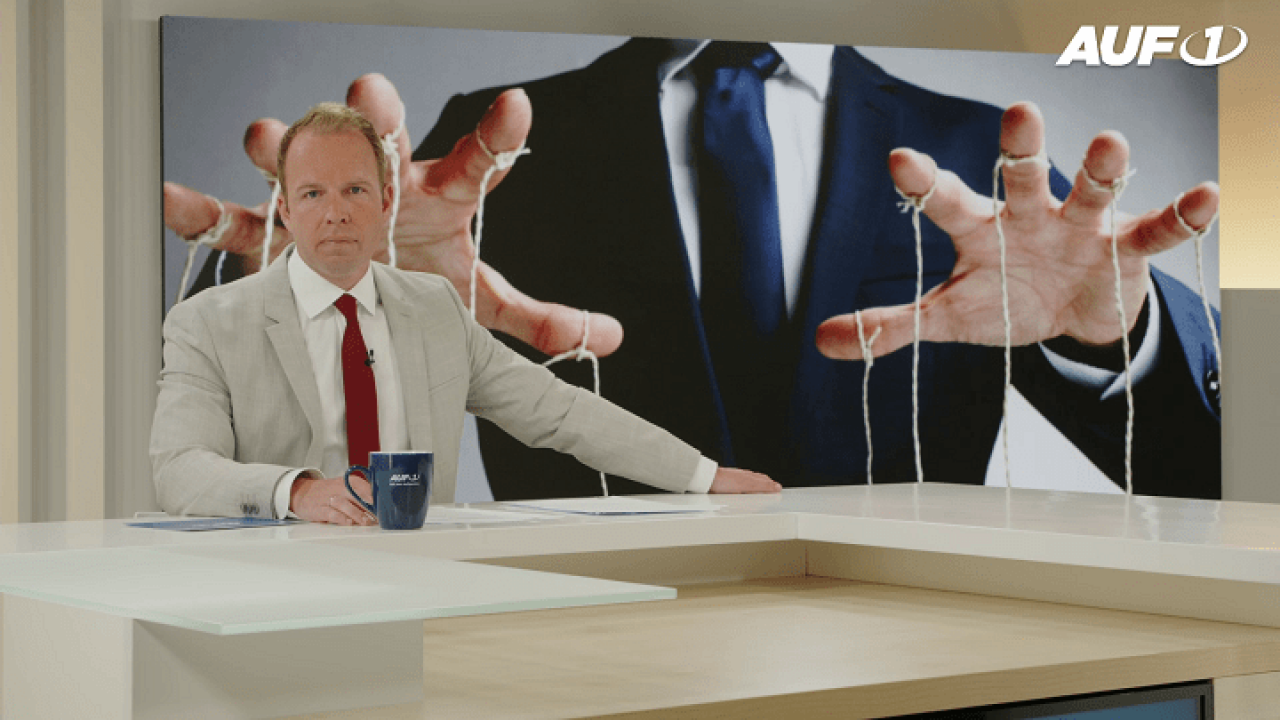