This article is also available in German.

“In 3-4 months, I’ll get an Uzi. You can post it, when I take picture”, a member of the newly formed group Atomwaffen Division Europe suggests on January 13, 2021. A compact, fully automatic submachine gun, also known as an Uzi, would be fatal in the hands of far-right terrorists. Excerpts from chat transcripts obtained by Belltower.News show the attempt to found a European offshoot of the internationally networked far-right terror group. Their inspiration: “Atomwaffen Division” (AWD), an extremely dangerous far-right terrorist organisation founded in the USA that has so far been linked to at least five murders.

Their logo, a radioactive radiation warning sign, appeared in a Telegram channel on January 12, 2021, alongside an official founding declaration of the so-called Atomwaffen Division Europe. In early 2020, four members of the original Atomwaffen Division were arrested by the FBI, but remaining members organised themselves into new groups, such as the National Socialist Order (NSO). However, in their well-connected online bubble, the deadly ideology, manuals and propaganda of the group remained accessible.

Although the new European group claims to have no contact with the old members of AWD in the USA or with an offshoot that was founded in Germany, they leave no doubt in wanting to follow in the same violent footsteps as their predecessors. Their goal: to establish the supremacy of the “white race” and pave the way for the “future of National Socialism in Europe” – and they are prepared to use violence to achieve these aims. The neo-Nazi James Mason is an icon in AWD circles: his book “Siege”, a collection of his newsletter, serves as these young men’s bible. They want to bring about the imminent collapse of society. The group is internationally well networked – and parts are heavily armed.

“Armed resistance, yes or no? I’m for it”, writes a German member of the chat group. Another member agrees. The problem: they still do not have sufficient weapons. However this can be solved, one member adds – and refers to violent and militarily trained neo-Nazis in Russia and the Ukraine.

The Azov Regiment, a far-right volunteer battalion, has previously provided military training to right-wing extremists from numerous countries. Neo-Nazis in Germany, including members of the Atomwaffen Division Europe, have also expressed a desire to train with the group. “I want to spend my holidays there to get some training”, writes Patrick G. in the group chat. He claims to have already messaged relevant contacts about attending a training camp, providing group members with tips on who to contact.

Patrick G. is a familiar face on the far-right. Holiday photos on Instagram show him next to his childhood friend, the far-right rapper Christoph Zloch, better known as Chris Ares, and the rappers Kai Alexander Naggert (Prototyp) and Andre Laaf (Primus), who both run the far-right music label Neuer Deutscher Standard (New German Standard). G. also promoted the far-right fashion brand Isegrim Clothing in private chat groups. The manager of the brand, Markus B., is well connected in the neo-Nazi scene and is a “very good friend and upright nationalist”, G. writes in the group. A photo seen by Belltower.News confirms this connection, showing G. arm-in-arm next to Markus B. and Christoph Zloch, among others.

Design skills from the NPD 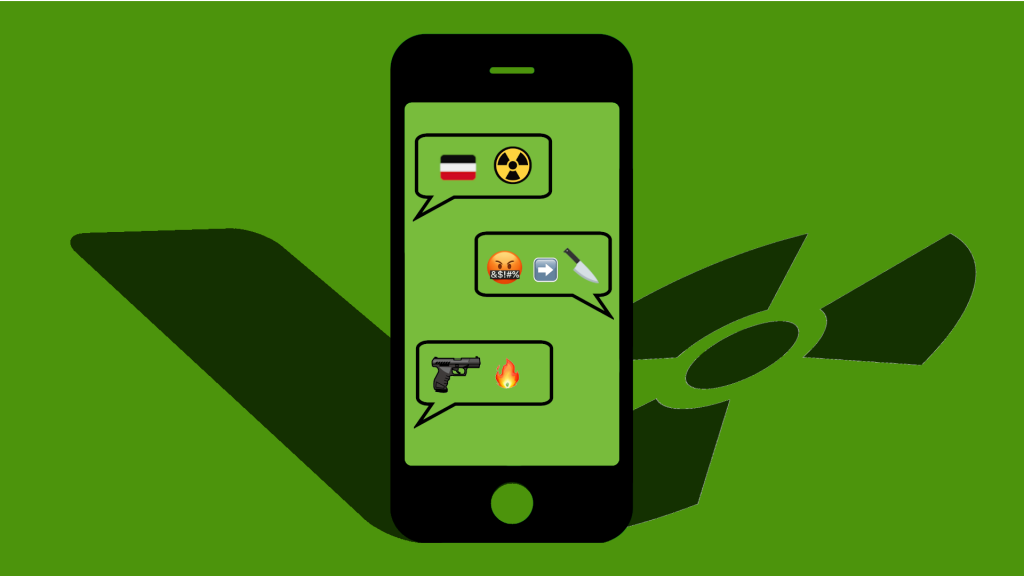 The tattoos, including far-right symbols, that G. proudly posts in the group make him easy to identify. He feels safe, even when his shirtless profile picture was used in Atomwaffen Division Europe propaganda. Steven T., a good friend of G. and member of the NPD in Schleswig-Holstein, handled graphic design for the group. “I can help you with design, I also do it for the NPD”, he mentions to a group member. T., who comes from Elmshorn in the north of Germany, is already well-known in the region. He founded the Deutsche Patriotische Gemeinschaft (German Patriotic Community, DPG), which sought to involve young people in NPD-affiliated structures. The NPD Westküste (NPD West Coast) denies this in a Facebook post, but does confirm T. as the man behind DPG. The DPG was subsequently active under the name Division Sankt Michael (DSM).

Research by Belltower.News, however, paints the picture of a man who repeatedly recruited minors for far-right structures. Shortly after T. joined the Atomwaffen Division Europe private chat under the pseudonym “Steven Der Sturm” on January 14, 2021, the group began attracting more and more German members. A dozen of the 25 or so members come from Germany. Almost all of them know T. and many are under the age of 18. Some are in their final year of secondary education in Saxony, others attend school in northern Germany. In chats, they complain about digital school lessons during the covid-19 pandemic while also sharing videos glorifying far-right terrorist attacks, as well as calling for the murder of Jews and inciting other forms of violence.

A profile picture in the group chat shows a teenager wearing a T-shirt of the local youth fire brigade. Occasionally, the young firefighter shares pictures of himself giving the Hitler salute and wearing a skull mask or attending protests against measures to prevent the spread of Covid-19 in the region. Instagram posts showing the young Mecklenburger holding a banned imperial flag, the Reichskriegsflagge, garnered likes from 14-year-olds.

The social media profiles of other group members show typical life in provincial Germany: teenagers posing with bottles of alcohol. But a look at the lists of their friends and followers on Facebook and Instagram suggests that the minors are well-connected within the German neo-Nazi scene. The degree of radicalisation is alarming. One 16-year-old’s profile has C18 in the description, a reference to the banned far-right terrorist organisation Combat 18. Information obtained by Belltower.News supports the suspicion that he is also a member of the new Atomwaffen Division Europe group on Telegram. On his Instagram profile, he uses AWDE, or Atomwaffen Division Europe, instead of C18.

The private Telegram group was founded by a Polish member, who recruited potential comrades-in-arms from relevant groups within the far-right terrorist online subculture. The private chat is an international mix, consisting of members from Poland, Ukraine, Germany, the UK and the USA. What unites the odd 25 members is an ideology of hatred, fantasies of killing other social groups and the idea of a supposed “white race”. But also a professed belief in unconditional militancy.

Many group members already possess weapons. To create propaganda images for the public AWD Europe channel on Telegram, they pose with clubs, blank guns, ammunition, axes and knives next to Nazi memorabilia, far-right symbols and military equipment. A 16-year-old member spoke with a German member about the different weapons he owns, ammunition he made himself and blank pistols he converted into live ones. One member also enquired about the possibility of making his own weapons. So-called “Plastikovs” are plastic versions of an AK-47, a widely used assault rifle.

“What do you think of a Plastikov as a weapon? Is it good?”, asks the group administrator.
“You need parts from the kit of an AK-47 for that”, replies a 16-year-old member.
“That’s good. Does it shoot like an AK?”
“Presumably.”
“How much does it cost to make a Plastikov?”
“There are instructions on the internet. It probably costs up to 200 euros to produce”, a German school kid interjects.

These weapons are not meant for defence, but rather attacks, as calls for mass violence in the chat show. The Polish group administrator suggests printing leaflets, on them is the slogan: “The Holocaust didn’t happen, it should have happened”, with an SS skull donning AWD patches answering the question “6 million Jews?” with “Is that a challenge?” Below are the group’s contact details. The video of the far-right terrorist attack on two mosques in Christchurch, in which 51 people were murdered and 40 injured, is also shared. Group members honour the killer as a “saint” and mock the victims – routine behaviour within the group.

NPD structures as a recruitment platform 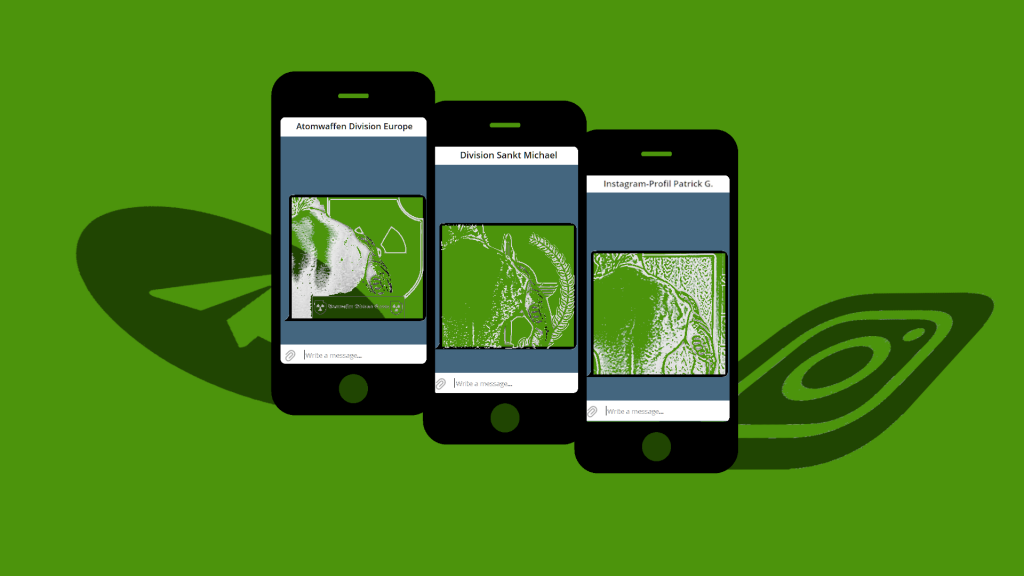 Propaganda and recruitment are of chief importance for the group. The NPD member Steven T. writes in the group chat: “I’m in politics and we can definitely use party structures to recruit people.” He also printed and designed the first flyers. “Ready for War – Atomwaffen Division Europe”, the flyer proclaims. Photos on the public channel show him posing with a swastika flag and a weapon.

A short time later, the group’s public channel on Telegram was removed. The group administrator also disappeared from the group. In the meantime, the NPD functionary T. and Patrick G. took over coordination of the group, fully committed to a new Atomwaffen Division. T. primarily wanted to expand the international network and increase their reach on social media. G., meanwhile, founded a new private chat.

Communication then switched primarily to German. An Instagram profile and a new public Telegram channel were set up, but quickly removed. The connection to T.’s youth group, the DSM, became more important and the same propaganda pictures appeared with the Atomwaffen Division Europe alongside Division Sankt Michael. T. himself embroidered his own T-shirt with the patch of Atomwaffen Division and DSM.

The NPD member T., already experienced in connecting with right-wing extremists around the world, set out to network for the new Atomwaffen Division Europe. These far-right kindred spirits across Europe have already sprayed graffiti for the group in their regions, are well connected and took group pictures for AWD Europe’s propaganda.

The Polish group member from Warsaw was previously arrested by security services in 2018 after he wore Waffen-SS symbols while attending a demonstration. During a subsequent raid at his home, Nazi memorabilia was found. In the chat, he claimed to have connections to Misanthropic Division, a neo-Nazi group that recruits fighters for the Azov Regiment throughout Europe. The man in his mid-30s posted pictures of himself giving the Hitler salute in front of a swastika flag. He revealed in a private chat that he recently purchased a bulletproof vest for 1000 euros and designed the logo for a Polish offshoot of Atomwaffen Division.

In the meantime, the NPD member Steven T. is not as anonymous as he once was. Antifascist research collectives outed the 27-year-old as the leader behind DSM and pointed to the group’s increasingly radical messages. Antisemitic and racist hate are juxtaposed with the violent aesthetics of the “Day of the Rope”, a trope among the far-right for a day on which so-called “traitors to the people” are to be hanged.

Atomwaffen Division Europe’s activities highlight the acute danger posed by the international networking of the far-right. Within a few weeks, a communication structure has developed that connects established neo-Nazi scenes across Europe, successfully recruiting minors and setting the stage for far-right terrorist action. “We are everywhere”, T. writes confidently. While that is not true, members of the group do come from around Europe. They do not yet have an arsenal of live weapons, but as our research shows, the will for armed struggle is very much present. The community is a ticking time bomb.