In November 2019, attention first turned to the international network of far-right “divisions” in Germany after threats were sent via email signed by the “Atomwaffen Division (AWD)”, although the language used in the email suggested it originated from an already-known far-right troll group.

These groups consist primarily of young, internet-adept, and internationally organised “white supremacist” far-right extremists who seek to bring about the collapse of democracy through terror. Their language and imagery are brutal, their style is bloodthirsty and security forces are increasingly recognising the very real threat these online Nazis pose.

On February 24, 2020 in Great Britain, the “Sonnenkrieg Division” (the British group uses on a German name, which translates to “Sun War Division”) was listed as a terrorist organisation and banned. This division was founded in October of 2018, following the example of the American far-right terrorist group “Atomwaffen Division” (which translates to “Nuclear Weapon Division”). The members planned, among other things, an assassination attempt on Prince Harry and on policemen. In June of 2019, two members, 18 and 19 years old, were arrested (see Guardian).

The latest such group calls itself “Feuerkrieg Division (FKD)” (in English, “Fire War Division”). “Feuerkrieg Division” is the second spin-off in the spirit of the “Atomwaffen Division”, and was presumably founded in 2018 in Estonia, where the group’s leader likely lives. In 2019, the FKD announced its presence in Ireland, Canada, Germany, Estonia, the Netherlands, Belgium, Norway, Russia, Great Britain and other countries. Their “presence” in these countries means that they have at least posted photos of their flyers there on Telegram. According to the Anti-Defamation League (ADL), the FKD has about 30 members internationally, with some in the USA, while the German magazine Spiegel reported 70 members, with the most in the USA (32) and Great Britain (9), along with members in Germany (6) and Canada (6). The group calls for a “race war” as well as attacks on synagogues and mosques and posts pictures of homemade explosives. They follow an accelerationist ideology as expressed in James Mason’s “Siege Newsletters” (in their language, “Siege culture”), whose “insights” they intend to implement. The FKD encourages members to “sacrifice” themselves and to understand violence as a means of solving problems and way of repairing the political and cultural “system” until a “white ethno-state” is achieved. Murderous antisemitism is inherent in the group, who believes the “system” is controlled by Jews. They refer to the war they dream of as a “holy war” or “white jihad”.

On February 5, 2020, a 22-year-old man was arrested in the Bavarian district of Cham in the Upper Palatinate and is alleged to belong to the “Feuerkrieg Divison Germany” and hold a “leadership position”. According to a report from Spiegel, the organisation has at least six members in Germany. A spokesman for the Munich Prosecutor General’s Office explained at the request of the German Press Agency (dpa) that the man is strongly suspected of having prepared a serious act of violence that would endanger the country. The dpa has also learned that “security services” are currently “devoting more attention to the investigation of ‘right-wing extremist internet groups’”.

According to chat transcripts obtained by Spiegel, at least six members of the “Feuerkrieg Division” reside in Germany. The 22-year-old, who called himself “Heydrich” online, expressed in the chat his intention to kill. He stated that he had completed military training with the Bundeswehr and had built a weapon in his parents’ basement. In January, “Heydrich” announced that he wanted to “become a saint”. The group worships racist, Islamophobic, antisemitic, anti-feminist or anti-LGBTQI* killers as “saints”. He described “a house of faith of bad people” as a “suitable place” for this. This led to his arrest. The other German members used the aliases “Teuton”, “Dekkit”, “Napola88”, “Wolfskampf” and “Jus-ad-bellum”. Within the organisation, they perform different tasks and functions. According to Spiegel, “Teuton” makes patches with the FKD logo and practices martial arts, “Dekkit” does propaganda, and “Wolfskampf” is still a minor.

In the USA, an FKD sympathiser has already been arrested. The 23-year-old Conor C., who gathered explosives and an illegal weapon in his apartment and intended to attack Jews and the LGBTQI* community (see ADL, Las Vegas Review Journal). In September of 2019, U.S. authorities arrested a soldier in Kansas who distributed bomb-making instructions and spoke in chats about possible targets for terrorist attacks. In the UK, investigators found instructions for building weapons and bombs on the computer of a 16-year-old FKD member.

In Lithuania, an FKD member placed an explosive device in front of a building on which a swastika was painted. However, the explosive device did not detonate. Nevertheless, the FKD channel celebrated, saying: “Our threats are not empty”.

The Feuerkrieg Division in Germany

While the call for a “race war” is always the focus of FKD activities, their primary work can be seen online – through networking and posts – and offline through flyer campaigns.

The project “De:Hate” from the Amadeu Antonio Foundation has been monitoring the online activities of the group closely since August of 2019.

A selection of their activities in Germany:

Starting in July 2019, the “Feuerkrieg Division” launched a Telegram channel. The first post referred to National Socialism and the attack on Utoya while announcing “activism” with a blood-spattered image.

On August 21, 2019, the FKD encouraged users on its Telegram channel to join the German group, with an explicit positive reference to National Socialism, the murder of the CDU politician Walter Lübcke and the Christchurch shooting, in which 51 people were murdered.

Regarding their “activism”, the FKD channel posted eight pictures on August 22, 2019, displaying antisemitic posters hung up at a bus stop in Germany.

And: right-wing extremist, racist, antisemitic and violence-glorifying posters under an underpass.

On September 12, 2019, the group posted graffiti from Germany. “Siege” is the book that inspired the founding of the “Atomwaffen Division” and the “Sonnenkrieg Division”.

James Mason’s (author of Siege) hateful content is celebrated in the channel, as shown below:

On October 16, 2019, another graffiti was posted, supposedly in Germany – here sprayed not particularly artfully over an existing graffiti.

On October 28, 2019, another act of vandalism with swastikas:

Lots of German content is presented in English on the FKD channel:

Current topics in Germany are also discussed. Here, a photo is shared in the channel that allegedly shows a boy who was pushed in front of a train by a mentally-ill fugitive in Frankfurt am Main (the disinformation about the boy is popular in the far-right scene, and has been disproven by Correctiv).

On October 28, 2019, the channel posted racist and anti-refugee pictures from Vienna: 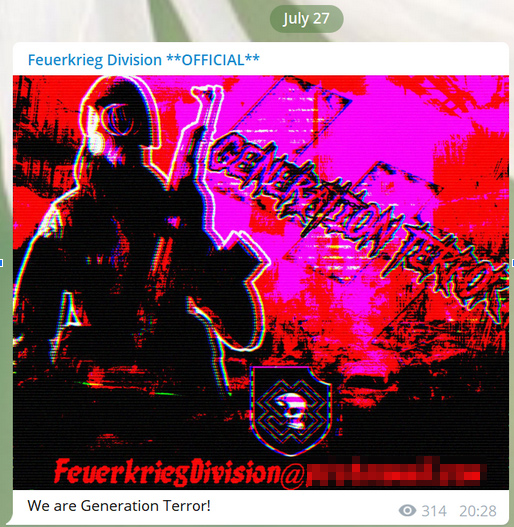 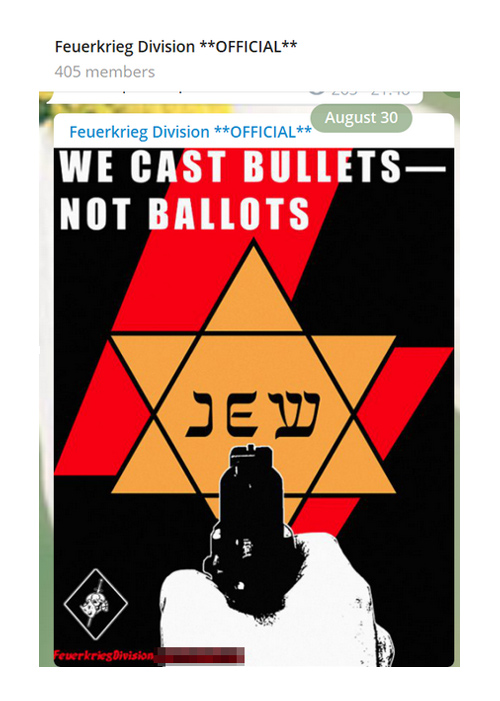 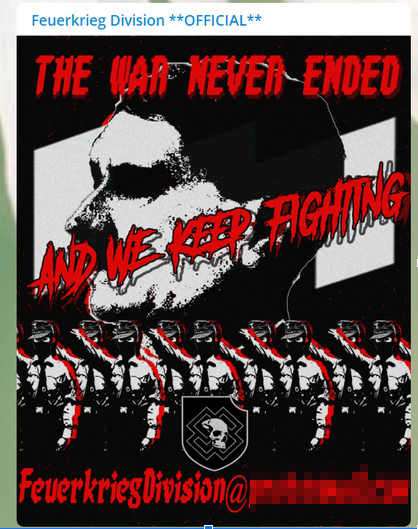 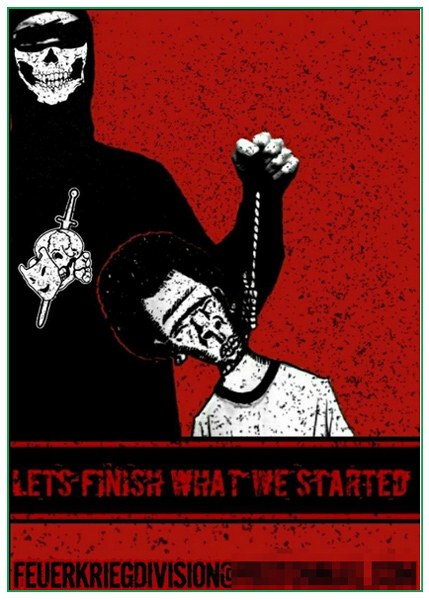 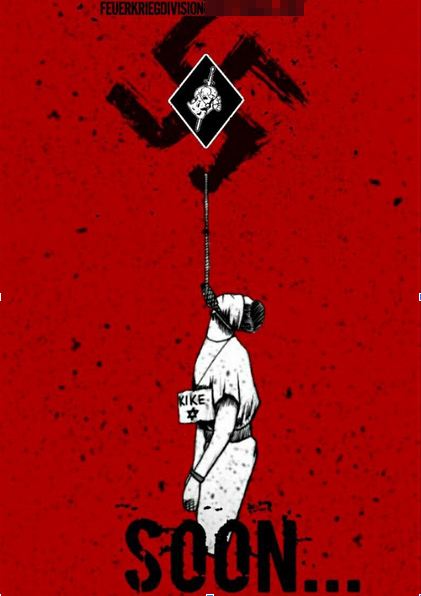 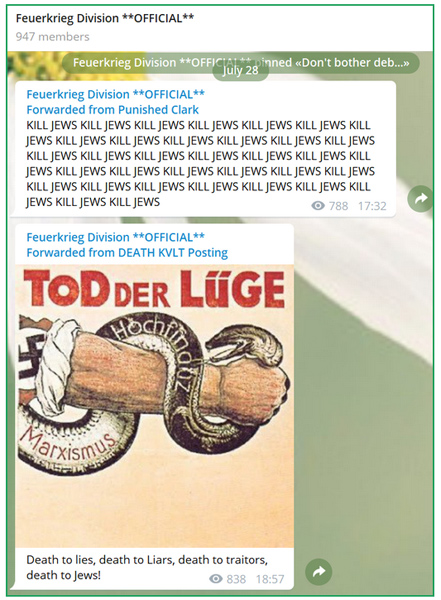 On their Telegram channel, FKD members and sympathisers from many parts of the world network and call for violence.

Channels with guides on building DIY weapons are also shared.

The “Feuerkrieg Division” officially announced the dissolution of the group on February 8, 2020. However, this just means the far-right, wannabe-terrorist, NS fans will continue under a different name and as different organisations.

Messenger services like Telegram are still excluded from proposed Network Enforcement Act (“NetzDG”) restrictions, although all channel content is open and accessible from internet browsers. Telegram has, so far, only acted against Islamist terrorist content. In recent days, far-right channels have been deleted – because the channels shared Islamist content.

The black-white-red flag of the German Reich is a favourite among Nazis old and new. Most recently, it has become a permanent fixture at demonstrations ostensibly against the German government’s measures to fight the Covid19 pandemic. But what exactly is so problematic about this flag and what does the law say in Germany? An overview.