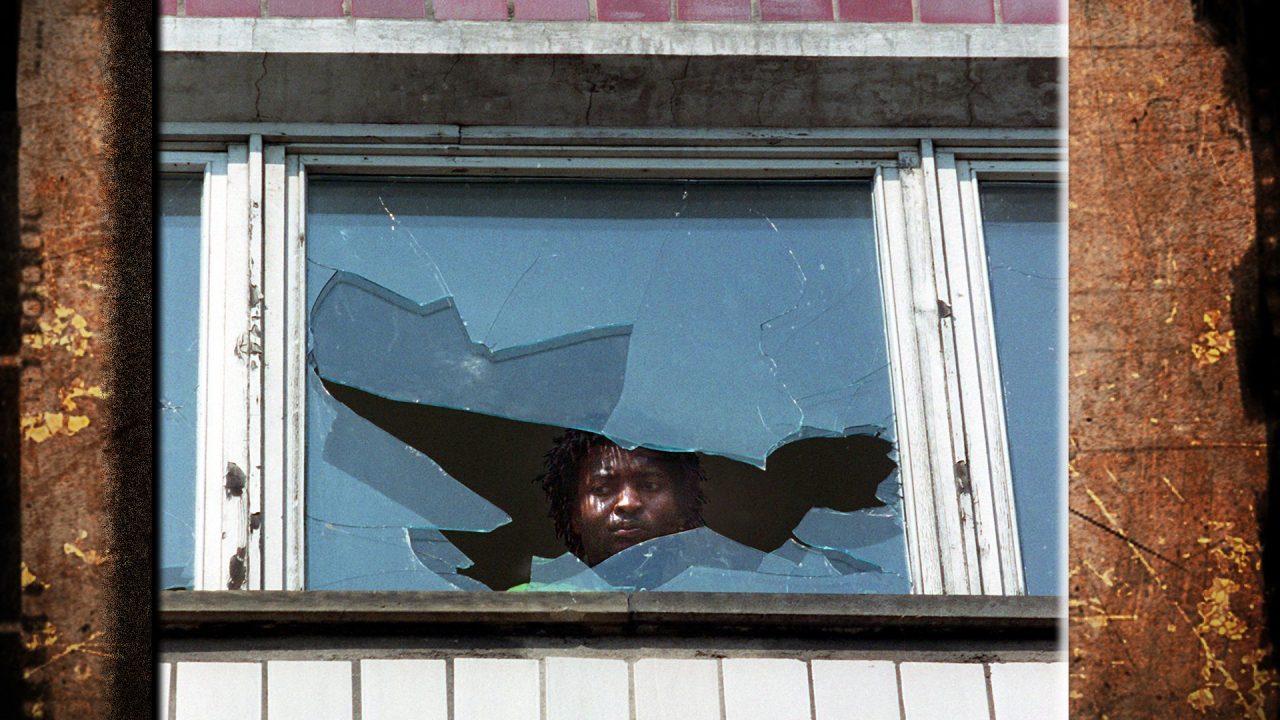 On 23 September 1991, an asylum seeker looks out a broken window at the residence for asylum applicants in Hoyerswerda in the German state of Saxony. (Quelle: picture-alliance/dpa and Pixabay/BTN)

A long, grey industrial apartment block with balconies: the windows have been destroyed, city residents are in front of the building howling. From a broken window, a man from Mozambique looks at the crowd in shock. In September 1991, these images circulated around the world. It was the hateful face of a reunited, racist Germany.

How it all began

It all started on Tuesday, 17 September 1991, when at least eight young neo-Nazis attacked a group of Vietnamese contract workers at the marketplace in Hoyerswerda. They ultimately fled to the residential building for contract workers in Albert Schweitzer Str. in the middle of a mammoth housing estate called “WK X”, in what was then a city with 50,000 residents. Approximately 120 contract workers from Mozambique and Vietnam lived in that block.

Most of them had come to East Germany in the mid-1980s, been trained in industrial trades, and were employed in the various workshops and the brown coal mining operation run by the state-owned company Schwarze Pumpe. In 1991, the brown coal industry, which was the main employer in the region, laid off thousands of workers. Near the end of that year, the contract workers’ contracts with the successor company LAUBAG AG were terminated, just like those of many of the people from Hoyerswerda who had worked for Schwarze Pumpe.

The neo-Nazis pursued the Vietnamese workers to the building. Over the hours that followed, a steady stream of far-right extremists and “average citizens” arrived. They began pelting the building with rocks and bellowing far-right slogans. More and more people gathered in front of the building. The police showed up eventually and called for the onlookers and violent perpetrators to leave – to no avail.

On the following day, the growing right-wing mob eventually even attacked the building with Molotov cocktails. The residents feared for their lives due to the fact that the completely overwhelmed police force mostly left the attackers unchallenged – while other citizens either watched with indifference as all the windows in the building were smashed or applauded.

Heinz Eggert, the future Interior Minister of Saxony (1991-1995), later explained the escalation in a documentary by saying that the radical youths were “encouraged by honest citizens of Hoyerswerda”. The right-wing mob of hundreds of people besieged the contract workers’ building for two days and two nights. The people inside sometimes recognized their co-workers among the attackers. Manuel Nhacutou from Mozambique, who lived in the building at the time, later described the events in an interview published in the antifascist magazine Antifaschistisches Infoblatt (AIB): “Our neighbours encouraged the skinheads and clapped their hands. Many of the people I saw in front of the building weren’t skins, they were neighbours and co-workers. I knew a lot of them. That was a painful experience.”

The authorities ultimately capitulated: on 20 September, 60 people from the building were transported out of Hoyerswerda on buses with a police escort. Almost all the contract workers were brought directly to Frankfurt or Berlin and deported from there.

Mob moves on to refugee hostel

Even then, however, the riots were still far from over. Obviously driven by their victory over state authority and the fact that their violent antics had actually forced the migrants to leave Hoyerswerda, the racist mob shifted to nearby Thomas Münzer Str. on 20 September 1991, where a home for asylum seekers was located. Roughly 240 refugees from Vietnam, Romania, Ghana, Iran, Bangladesh, and elsewhere were living there. In the weeks prior, neo-Nazis had already smashed the building’s windows in and its residents were attacked by neo-Nazi groups during their few excursions into town.

Far-right skinheads and ostensibly “average citizens” pelted the building with rocks and Molotov cocktails. They started a fire around the building. The mob chanted racist and neo-Nazi slogans like “Ausländer raus” (foreigners out) and “Deutschland den Deutschen” (Germany for Germans). Eventually, neo-Nazis also physically attacked individual residents. The refugees were effectively locked in their own building, surrounded by about 1,500 people.

“All the windows in the building were broken. After that, we all went to the roof so that no one would be injured”, Emmanuel Adu Agyeman, a Ghanaian refugee who lived in the building at the time, told AIB in a 2011 interview.

The police surrender to the mob

The police were once more overwhelmed by the situation. They were unable to protect the refugees and could scarcely defend themselves from the mob. Three police vehicles went up in flames and numerous officers were injured. The authorities ultimately had to capitulate yet again to the violent, racist perpetrators. According to an official assessment of the situation by the Hoyerswerda administrative district office dated 20 September 1991 at 12:00 pm, “there is a consistent impression that the departure of the foreigners is the only possible final, definitive solution to the problem”. On the morning of 21 September, the building’s 240 residents departed by bus under the protection of police tactical units – amid howling applause. Still, the Nazis and onlookers had not yet had enough. They pelted the buses with rocks and bottles as they drove away, shattering a window and seriously injuring 21-year-old Tam Le Thanh from Vietnam.

After the security forces surrendered to the racist hooligans and the many spectators, neo-Nazis celebrated Hoyerswerda as Germany’s first “foreigner-free city”. Those five days of continuous attacks are considered the first racist pogrom in Germany after 1945.

Fuelled by the state’s powerlessness to respond appropriately to these racist rampages, Hoyerswerda served as a starting signal and legitimisation for neo-Nazis and racists to commit numerous subsequent attacks on immigrants. Acts of violence followed the Hoyerswerda pogrom throughout the country. Even while the overwhelmed police watched from outside the contract workers’ residence as one window after another was smashed on 19 September 1991, 27-year-old Ghanaian refugee Samuel Yeboah was burned to death in an arson attack on a refugee shelter some 718 km (446 miles away) in Saarlouis in the state of Saarland (see Belltower.News). There were 78 racist attacks nationwide the following weekend alone. Among other things, there were also the riots in Rostock-Lichtenhagen on 22 and 26 August 1992 and the fatal attacks in Mölln on 23 November 1992 and Solingen on 29 May 1993.

The scale of the sheer hatred shook Germany. Neo-Nazi violence was not a new phenomenon, including in the GDR. Officially, East Germany had no right-wing extremists. The state declared itself anti-fascist, after all. Nonetheless, violence from neo-Nazis existed there as well. What was new in Hoyerswerda was the broad approval for the pogroms from ostensibly “normal” people. Incited into a frenzy of hate, they cheered on the hooligans, joined in with the nationalist choruses, and ultimately became perpetrators themselves. While the riots led to 82 provisional detentions, in the end, only four suspects were actually convicted.