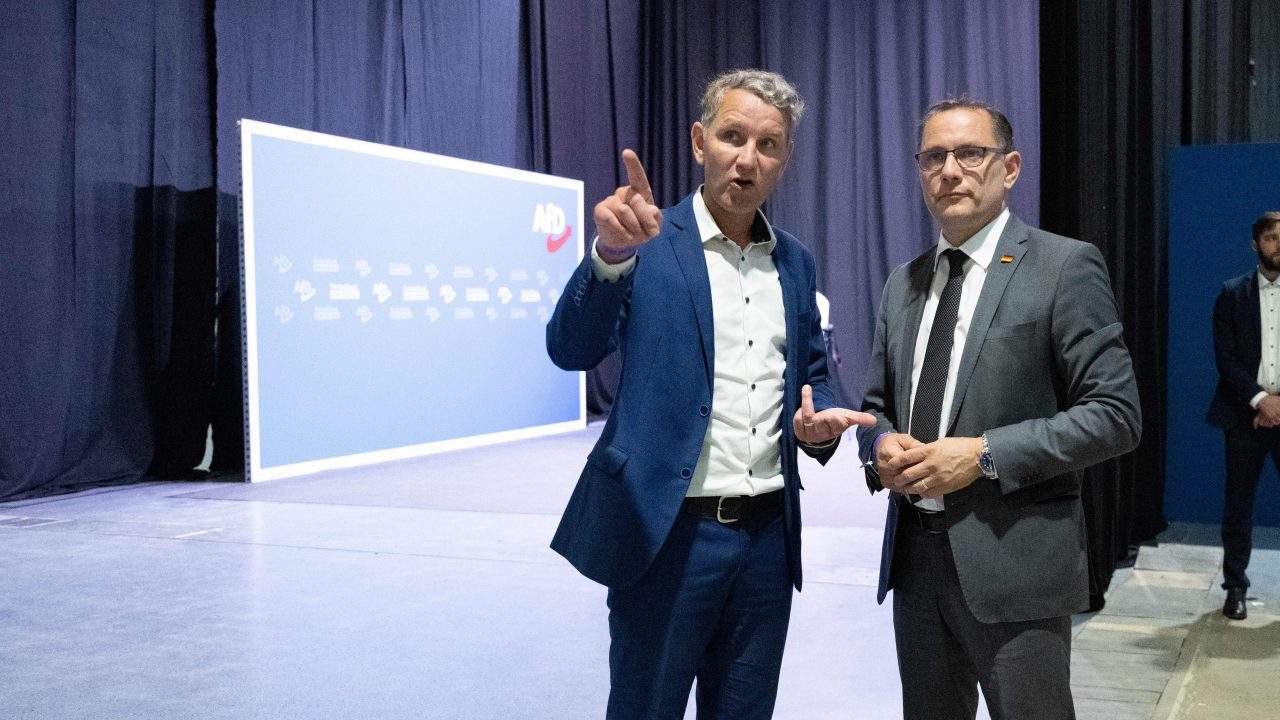 The party conference in Riesa (see Belltower.News) was going smoothly until Sunday, 19 June – at least for the Höcke camp. Even externally, AfD appeared almost harmonious and cohesive, by its standards. But Tino Chrupalla’s narrow re-election as one of two national spokespersons made it all too clear that the harmony would not last long.

In a discussion after the party conference had ended, Hans-Thomas Tillschneider, AfD’s acting state chairman for the state of Saxony-Anhalt, rejoiced with leading German New Right intellectual Götz Kubitschek that the conference had elected “the best board ever”. His choice of words inevitably raises the question of whether he was only referring to the not quite ten-year-old AfD or also to its predecessor in spirit, which was founded in 1920. In his conversation with Kubitschek, Tillschneider emphasized how many members of the party’s far-right wing advanced elsewhere as well, allowing the board to reflect all of the currents within the party for the first time. The fact that figures like Beatrix von Storch, who leads the party’s Christian fundamentalists, Joana Cotar, a climate denialist but a relative moderate within the party, Joachim Kuhs, leader of the organisation Christians in the AfD, or even party co-founder Kay Gottschalk are no longer to be found on the board is one indication that the pseudo-moderates no longer have significant power. Gottschalk even tried to woo the far right in advance of the conference by hiring former AfD Bundestag representative Christian Lüth. Lüth had to resign in 2020 amid revelations that he had made statements to the effect that immigrants could be allowed into Germany and then simply “gassed” or “shot”. He also identified himself as a “fascist” (source: t-online.de).

After the party conference ended, it was revealed that the apparent harmony at the start was largely the product of discussions between different factions beforehand. Acting chairman of the Saxony-Anhalt state party Hans-Thomas Tillschneider indicated as much in enraged internal chats that were leaked to regional German television broadcaster MDR. He complained that “Björn Höcke was promised the strategy committee if he didn’t run for the national board” (link: mrd.de). In an interview immediately after the conference with German New Right power broker Götz Kubitschek, Tillschneider accused members of the party’s national board – specifically co-chairs Chrupalla and Weidel – of having started a “war on their own party” that Sunday at the conference, just as deposed party leaders Bernd Lucke, Frauke Petry, and Jörg Meuthen had previously. The fact that he named them all in one breath should make it clear how quickly things could come to an end for Weidel and Chrupalla if they do not bring their “war” to an end.

Tillschneider is not the only one in the party to use that phrase. In a blog post that did not mention Weidel and Chrupalla by name, but that nonetheless amounted to an unmistakable challenge to their leadership, Kubitschek summarized the position of the far-right wing by writing that “all discussions and exploratory talks before the party conference were based on the necessity of disempowering those who wanted to continue their war on their own party. Obviously Björn Höcke also participated in those discussions.”

Weidel appears to be completely unfazed by these accusations. On the contrary, at a press conference on 24 June she took an aggressive swipe at a resolution that was passed at the conference – essentially by Björn Höcke – stating that the right wing workers’ association Zentrum Automobil should be removed from the party’s list of individuals and groups that it will not work with. In her view, the group is not a union, but rather an “extremely toxic club” in which “toxic personalities” who hang out in far-right crowds hold sway, particularly on the executive board. Consequently, she – with Chrupalla in tow – is headed for a direct confrontation with Björn Höcke. Höcke had managed to get Zentrum Automobil removed from the list at the party conference after Weidel had it added in October 2021 by means of a resolution by the executive board. Höcke’s argument in favour of removing Zentrum Automobil from the list was that “we decide who is extreme”. Now Weidel has made that decision publicly, affirming that she considers at least some members of the group’s board to be extremists. Höcke must also view that as a serious attack against him.

Contempt for the party base

Weidel would not be Weidel if she did not also offer a simple clarification for why the resolution removing Zentrum Automobil from the list was such a painful defeat for her. In an interview with national TV news program Tagesschau (starting at ca. 5 minutes), in which she was famously unable to say what constitutes right-wing extremism, she explained – on camera and as the conference was still ongoing – that many delegates at times had no idea what they were voting for. She repeated that charge almost verbatim at her press conference.

In bashing the party base, she at least seems to have found one area where she agrees with Höcke. After discussions with him and several AfD delegates, Kubitschek criticized the base in almost identical terms with respect to the failure of a resolution calling for the EU to dissolve itself. In his words, “the people who worked on the proposal for months, fine tuned it, and brought it before important committees were under the impression that the resolution’s opponents who suddenly appeared hadn’t considered its contents during the time available before the party conference. I’ve rarely seen Höcke as upset as he was about this.”

In sum, the current co-chairs (Weidel and Chrupalla) and the chairman-to-be (Höcke) together with his “whisperer” (Kubitschek) have all declared that a large portion of party delegates are either too dumb or too lazy to know what they were voting for at the party conference. They could hardly show more contempt for rank-and-file members. Other high-level AfD officials also made no secret of their disdain for their party base and their lack of interest in the party conference. Acting state party chairman for the state of Thuringia tweeted “Opened party conference stream briefly. One side goes full tilt to pass a contested resolution with a 1 vote majority. Other side tries to prevent a resolution with a flood of motions. Gave up hope. Stream off.”

Krah suspended: “behaviour grossly detrimental to the caucus” in the European Parliament

The party is at daggers drawn elsewhere as well as its caucus in the European Parliament likewise appears to be increasingly dismembering itself. After he was defeated at the party conference, Nicolaus Fest revealed that new party board member Maximilian Krah had been suspended from the EU Parliament’s Identity and Democracy caucus on 5 April of this year. The reason: “behaviour grossly detrimental to the caucus”.

The state of Lower Saxony will hold state parliamentary elections in October. Poor results or even a failure to reach the 5% threshold could intensify internal party conflicts. It doesn’t help that Lower Saxon AfD party chairman Frank Rinck was fined over € 8,100 last week for knowingly driving without a license (see: Weser-Kurier). However, AfD at least gained a few points in national surveys after the party conference. Thus far, media interest – including negative reporting – and radicalization have seldom hurt AfD.