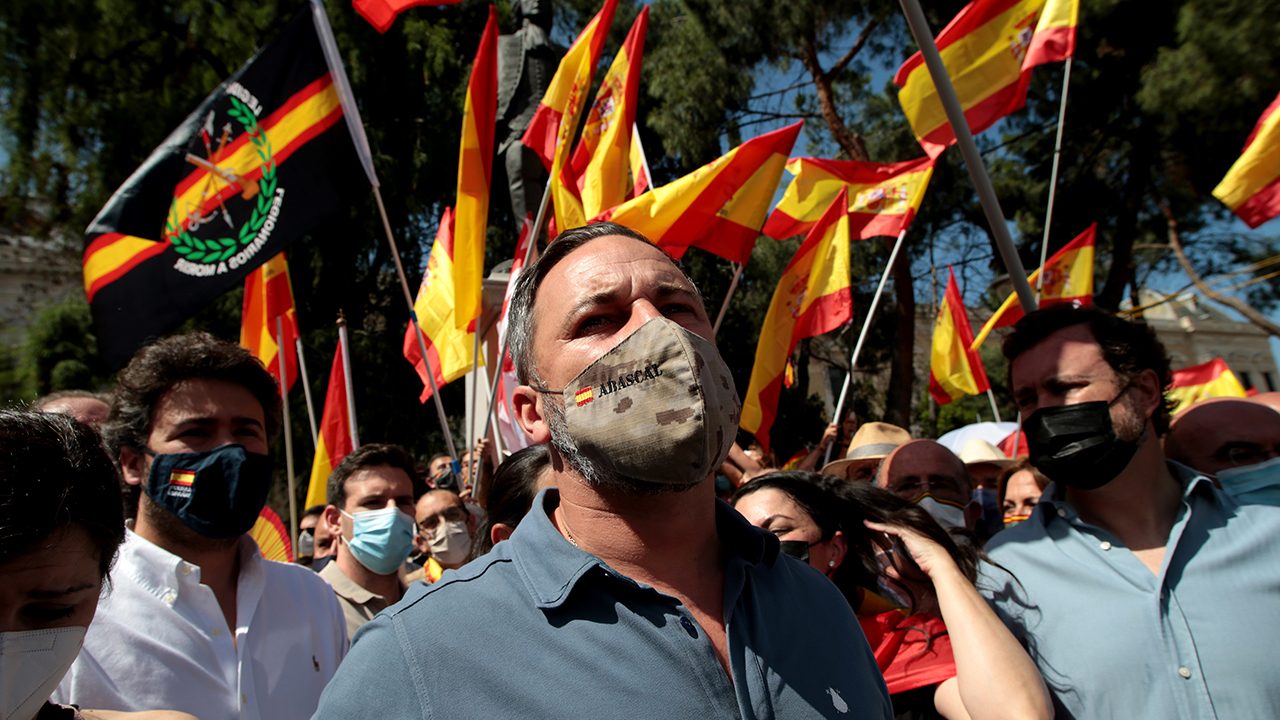 Santiago Abascal knows about the power of framing, the importance of language, and the effect of strong words. The head of the far-right party Vox (Latin for “voice”) has recently been throwing around two strident coinages. During a short visit to Mexico by Vox’s leadership, he spoke on the one hand about “narco-communism” and on the other about the “Iberosphere”. This was despite the fact that hardly any existing phenomenon adheres to the principles of capitalist economics more recklessly or to a more extreme degree than the shadow economy of the narcotics trade in Mexico. His so-called Iberosphere designates North and South America because both regions ostensibly have Spanish roots.

On 2 September 2021, 15 senators and three congressional representatives from Mexico’s Christian-conservative Partido Acción Nacional (PAN, National Action Party) received a visit from the ultra-right wing party Vox. Party leader Abascal had allowed himself a neo-colonial insult on Twitter a month earlier, writing that “Spain was able to liberate millions of people from the bloodthirsty and terrifying Aztec regime. Proud of our history!” The occasion was the 500th anniversary of the fall of Tenochtitlan. As though the Spaniards had done Mexico a great favour with the Conquista.

That did not seem to bother the PAN senators, who jointly signed the Carta de Madrid (Madrid Charter). This muddled piece of writing proclaims that part of the region is “held hostage by communist-inspired totalitarian regimes that are supported by drug dealers and third countries”. So far, so absurd. It is precisely this alleged “communist advance” that presents a “serious threat” to prosperity, liberty, and human rights in the so-called Iberosphere.

Strategic networking on the right

As the Spanish newspaper El Mundo has noted, the Carta is a response to the past establishment of the left-oriented alliances the Foro de São Paulo (Sao Paolo Forum) and the Grupo de Puebla (Puebla Group). These groups are supported by popular Latin American left-wing (ex-)presidents, including Rafael Correa of Ecuador, José Mújica of Uruguay, and Evo Morales of Bolivia. In the interest of building a strategic network and establishing contacts, Vox is now looking for partners for a “Foro Madrid” (Madrid Forum). The objective: an internationally networked alliance against the alleged spectre of “communism”.

Flashback to July of this year: Beatrix von Storch, the acting chair of far-right German party Alternative für Deutschland (AfD, Alternative for Germany), and her husband Sven are visiting Brazilian president Jair Bolsonaro and his son Eduardo. A photo shows Bolsonaro, von Storch, and her husband smiling. The president’s son proclaims the shared ideals of “defending the family,” “border protection,” and “national culture”. For her part, von Storch adds that her party wants to “be part of a stronger network and stand up for your Christian-conservative values at the international level”. Seemingly casual encounters like these should not be taken lightly. Extreme right-wing networks in Europe are drawing in larger and larger circles and they are no longer limited to their own continent.

A copy of Trumpian populism

Only a handful of countries around the world are actually run (at least officially) by communist governments: Cuba, Laos, Vietnam, North Korea, and China. That hardly seems to bother Vox, its voters, or parts of Mexico’s PAN. Mexican investigative weekly magazine Proceso makes a comparison with Donald Trump. With respect to Vox, writer Alejandro Gutiérrez notes that its “discursive strategy is a copy of Donald Trump’s populism”. For instance, the ultra-right party has repeatedly accused Spain’s leftist government of acquiring power “illegitimately”, despite winning elections legally.

This tactic is not new. On the contrary, it has become a socially acceptable strategy on the extreme right and it is also increasingly being used in Germany, for instance by the right-wing Ein Prozent (One Percent) network. Their goal is not to debate the facts, but rather to stimulate the brains of potential voters; they seek to turn uncertainty, fear, and concern into action.

The group behind the “Madrid Charter” is the Fundación Disenso (Dissent Foundation). Its chairman? Santiago Abascal, the leader of Vox. Abascal is a central figure in the organization. The private foundation was founded in 2020. It is ideologically closely connected with Vox and is intended to operate in the background as a think tank. The Disenso foundation is a member of the Free Speech Alliance, a coalition of over 70 conservative organizations, primarily from the United States. This self-identified alliance fights against “online censorship”, which it believes primarily works against conservatives.

One member of Disenso with a politically turbulent past is Hermann Tertsch. He is a European MP for Vox and was part of the delegation that traveled to Mexico to network with the opposition party PAN. In his youth, Tertsch was a member of the Euskal Herrialdeetako Alderdi Komunista (Communist Party of the Basque Homelands). He also made a name for himself as a journalist and, in the early 1980s, worked as a correspondent for the Spanish news agency EFE and the newspaper El País. Two decades later, his political orientation shifted 180 degrees.

His father was Ekkehard Tertsch, also a journalist and a member of the Nazi Party in Austria. He volunteered his services as a spy to Germany and later became a diplomat. Ekkehard Tertsch worked with Josef Hans Lazar, who largely controlled the Spanish press during World War II. Hermann Tertsch regards journalists who report on his family’s Nazi past as “scum”.

But there is another organization that plays a crucial role in disseminating Vox’s positions: CitizenGo. A few months ago, the whistleblower platform WikiLeaks published about 17,000 documents and dubbed CitizenGo “The Intolerance Network”. According to German newspaper taz, which received the leak in advance, the documents came via a Dropbox account with personal folders belonging to Ignacio Arsuaga, president of the CitizenGo network. Arsuaga has been a close friend of Santiago Abascal’s for many years.

Ignacio Arsuaga, a lawyer, co-founded the association Hazte Oír (Make Yourself Heard) with two friends. It was later renamed CitizenGo. Funding for the group comes primarily from Russian oligarch Konstantin Malofeev, who in turn maintains close contact with the Russian Orthodox Church and president Vladimir Putin. Arsuaga, an anti-abortion activist, wants nothing less than to make CitizenGo “the most influential international Christian-inspired mobilization website”. That is what he wrote in a 2013 letter to the oligarch Malofeev.

Many different positions overlap in this network of hate: anti-abortion, anti-migration and refugees, anti-LGBT, anti-Islam – positions that are representative of Vox’s political orientation.

Of course, it is no coincidence that Mexico’s PAN has engaged with Vox and its views. From the time it was founded in 1939, it had scattered sympathizers for the Franco regime in its ranks. And not only that: some of them considered Nazi Germany as a kind of model. The newspaper La Reacción, which was openly sympathetic to National Socialism, was published in Mexico between 1939 and 1942 and PAN co-founder Manuel Gómez Morin was among its supporters and editors.

Returning to the agitators in the CitizenGo network, they have constructed a finely woven system that primarily creates propaganda – and wins supporters – through countless petitions and emails to delegates to the European Parliament. Journalists from taz explain it this way: “They flood representatives’ mailboxes with emails and start online petitions. CitizenGo collects thousands of signatures in no time at all. … For the European right, this grassroots mobilization is unprecedented”.

Analogously, the network agitates and, like Vox’s Abascal, utilizes deliberately misleading framing. In 2017, CitizenGo caused a major stir by sending an orange bus through Spain with transphobic slogans on the sides, such as “Boys have a penis. Girls have a vulva. Don’t kid yourself. If you’re born a man, you’re a man. If you’re a woman, you will remain a woman.” LGBT activists called it the “hate bus”; the people who created it dubbed it the “free speech bus”.

Since then, Vox has become the third-largest party in the Spanish parliament. Nonetheless, this is not just a matter of parliamentary power. It is about shifting the social discourse in favour of misanthropic views. That is the objective. In a 2019 interview in Proceso, Spanish journalist and author Antonio Maestre explained just why that is so dangerous: “The threat posed by Vox is not in their ability to act on their own parliamentary power, but rather in their enormous capacity to ‘saturate’ the public debate with its discourse and proposals and to spread them to the traditional right by assimilation”.