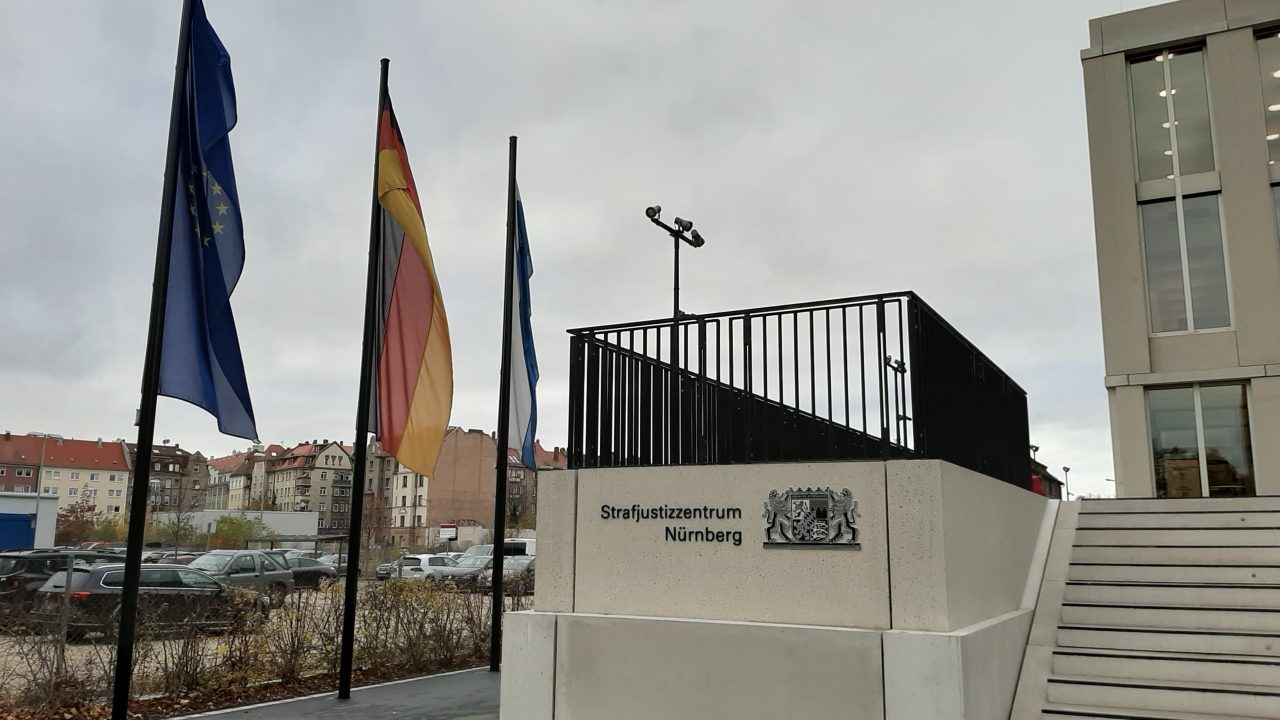 The first day of proceedings before the State Protection Chamber at the Nuremberg-Fürth Regional Court. (Quelle: Erika Balzer)

The trial against the defendant Fabian D., accompanied by two defence lawyers, began at 9 am sharp. The charge: endangering the security of the Federal Republic of Germany by planning to attack “places of worship”. According to the public prosecutor’s office in the indictment, he planned to commit a serious crime threatening the lives of others and procured and used materials and weapons or parts of weapons to this end. Under the pseudonym “Heydrich” on the chat platforms “riot” and “wire”, part of far-right terror group Feuerkrieg Division, he allegedly gathered and shared information on building and using weapons. His user name was presumably inspired by Reinhard Heydrich, a high-ranking SS officer under National Socialism and a main architect of the Holocaust.

At the end of January 2020, D. is said to have asked the group what he could do to become known or popular, that he wanted to be declared a “saint”. Members of far-right chats use the term “saint” to refer to individuals who have carried out deadly acts of far-right terrorism. These accusations resulted in the criminal offence charge of preparing a serious crime that endangers the state, leading to his arrest on February 5, 2020. According to his defence, the accusations are “objectively speaking a matter of fact, but from a subjective point of view, he did not mean all this seriously”.

On the first day of the trial, initially scheduled for four court hearings, Fabian D.’s mother, grandmother, biological father and cousin, as well as four work colleagues and the police officer who questioned him after his arrest in February testified.

Exchange with other members of the Feuerkrieg Division

Fabian D. comes from a small village in the Upper Palatinate region of Bavaria, close to the Czech border. He trained as an electrician and remained mostly inconspicuous. Witnesses on the first day of the trial described him as calm, introverted and reserved. His radicalisation likely took place in a chat group connected to Feuerkrieg Division. At that time, the group consisted of 30-40 members, most of whom claimed to come from European countries. The members exchanged ideas about which tools they could use to open locked doors of mosques or synagogues. Members discussed the mass shootings Halle and Christchurch and distributed videos of the attacks. Fabian D. showed a video from the group to his cousin, claiming the video originated from the Atomwaffen Division. The video showed uniformed men shooting. Fabian D. described these men as “politically engaged”. The police officer who arrested the accused in February said in his testimony: “They are so far to the right that, if there were an edge and you would try to go further to the right, you’d fall down”.

According to the testifying police officer, the defendant seemed to understand well that what he was doing, or at least trying to do, was not right. The defendant allegedly remarked: “Right, if outsiders saw something like that, they’d think a mass shooting was being discussed”. The accused cooperated and wanted to give more information about the chat groups in which he was active. He mentioned a planned meeting with a man from Stuttgart with whom he wanted to exchange ideas. However, this meeting did not take place.

Fabian D. lives with his younger sister, his mother and stepfather. He resided mostly in the basement. The mother of the defendant took the stand first. She testified that she had no suspicions about any of this. She knew about weapons that her son bought as “decoration” – two mock Kalashnikovs and an AK-47. Later, he owned two air rifles and three blank pistols, delivered to his grandparents or to a mailbox he set up.

In her testimony, his mother explained that she lacks a good relationship with her son. During the interrogation, she described the defendant as a “loner” who is very withdrawn and not very sociable. He never had many friends and, at most, had played with the neighbour’s children. When D. was about 8 years old, his parents separated, and he was bullied and beaten at secondary school. He took refuge in reading or computer games and, shortly before his 18th birthday, he attended therapy sessions several times for his gaming addiction. He lacked a good relationship with his sister or stepfather. Both made use of their right not to testify and refused to comment, stating that “they wouldn’t know anything about it anyway.” The relationship with his mother deteriorated to the point that the defendant installed a camera “to see when she goes into the room and what she does”. Until then, the relationship with all family members seemed very cold and marked by disinterest. Only his grandmother felt compelled to speak and testified that she had no idea what mailings she had accepted on his behalf and that she had not noticed anything regarding his radicalisation.

An affinity for weapons and the military

The judge repeatedly asked whether the witnesses ever spoke with the accused about political issues, weapons, or the “Third Reich”. No one mentioned noticing anything unusual or worrying. According to the witnesses, D. was only enthusiastic about computer games and the Bundeswehr, the German military. His path towards an affinity for weapons is thus not entirely clear. Beginning in 2018, his mother did, however, observe an interest in the Bundeswehr. Fabian D. almost exclusively wore military-style clothing and wanted to apply for the Bundeswehr. He ordered a camouflage tent and instant food to sleep outside and survive, according to his cousin. He described their relationship as a “love-hate relationship” with a constant up and down concerning the frequency of their meetings. Sometimes they went to the gym together, but he also mentioned an inability to access Fabian. Recently, the contact broke off when the defendant created a fake profile of his cousin on Facebook.

Although the defendant holds a small firearms license, his mother described his reaction as not particularly impressed or happy when she took him on a company outing to a shooting range in the summer of 2018. However, the trained electrician apparently developed a great interest in weapons over time and took pride in the weapons he owned. He worked in the town Furth im Wald at the time and once visited the home of an older colleague and learned the colleague held a large firearms license. The defendant wanted to know from him whether it was possible to arm blank guns. His cousin also described situations in which the defendant wanted to shoot in his grandparents’ garden or in which he was supposed to photograph Fabian D. with his “decorative weapons”.

His radicalisation went unknown to anyone in his immediate environment, although there were red flags. In court, an incident with a colleague came up, in which Fabian asked her if she was afraid of knives, before pulling one out of his trouser pocket. That Fabian ordered the book Mein Kampf, various German Army insignia and patches, and finally balaclavas with skulls – a symbol of Feuerkrieg Division – could have raised suspicion with his cousin. Outwardly, the witnesses said, it appeared he owned these weapons and knives for defence. The defendant allegedly told his mother that he feared the Czech employees in his company and felt safer with the weapons.