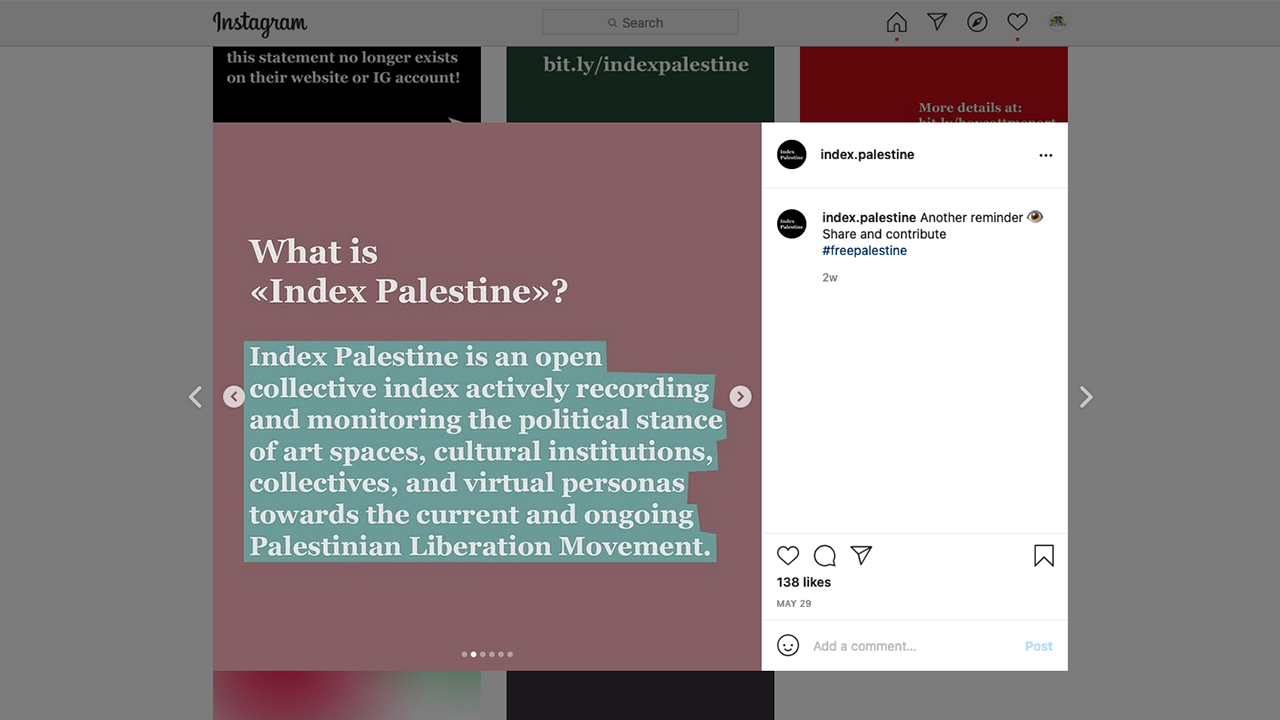 The list is long, the goal clear: 510 art collectives, clubs, museums, theatres and universities worldwide are named in a table entitled “Index of Cultural Institutions & Collectives’ Stance Towards The Current Palestinian Liberation Movement”. They are classified as either “supporter”, “pro-Zionist” or “silent”. A separate column lists supposedly incriminating evidence, mostly links to Instagram pages or posts. The list is the latest attempt by the BDS movement, which calls for a boycott of Israel, to polarise the cultural scene. Their aim: to stigmatise supposed political opponents. In Germany, the techno clubs ://about blank and Institut für Zukunft, the Berlin theatre Volksbühne and the Bauhaus University in Weimar, among others, have be labelled “pro-Zionist”. Internationally, the University of Toronto Art Museum and the Yale School of Architecture have also been targeted.

The so-called “Index Palestine” was created as a Google spreadsheet on May 18, 2021. Anyone in possession of the link, which has since been widely shared within the BDS spectrum, can edit and update the list. Omar Adel, a multimedia artist from Egypt, was named as the owner in a first version of the table before a new version was created by the user “Cultural Index for Palestine”. One of the first sites to post the link on social media was the Cairo booking agency and music PR firm Simsara Music. K-oh-llective, a group of visual artists from the Arab region, and the BDS blog Cultural Boycott for Palestine also link to the index on their websites. The initiators of the list have since created their own Instagram page with almost 700 followers. On a graphic, they explain: “Index Palestine is an open collective index actively recording and monitoring the political stance of art spaces, cultural institutions, collectives, and virtual personas towards the current and ongoing Palestinian Liberation Movement”.

Whether the list is supposed to be understood as a blacklist of institutions and groups who should be boycotted or subjected to protests, is not mentioned by Index Palestine. The initiators do recommend, however, that information be double-checked before “taking any action”. A pink tick is put in another column as soon as an entry is deemed to be “fact-checked” by the admins – a check that proves to be far from rigorous upon clicking on any of the supposed pieces of “evidence”. A request for comment from Belltower.News including a detailed list of questions about the exact purpose of the list, the group’s position on Israel’s right to exist and the group’s connection to the BDS movement was left unanswered.

The 145 “supporters” of the “Palestinian liberation movement” listed include intuitions and groups that are said to have clearly and directly condemned “the atrocities of the colonial state of Israel”. “Pro-Zionists” are labelled those who publish statements or show explicit support for the “colonial state of Israel”, or who spread “hate speech against Palestinians and Arabs”. So far, however, only 11 of the 510 institutions and groups mentioned have been classified as “pro-Zionist”. Seven institutions and groups, such as the Menart art fair in Paris and the Berlin festival Pop Kultur, are accused of “normalising” the Jewish state by participating in “normalisation projects” or receiving funds from unspecified “Israeli sources”. Other players in the cultural scene, such as the Nelly Sachs Prize and the Ruhrtriennale music and arts festival, are accused of “censoring” supporters of the “Palestinian liberation movement” by practising „institutional hegemony“ that “silences individuals”. However, the remaining 313 institutions and groups, and thus the majority of the list, are considered merely “silent”.

The list is problematic in many respects: First, it presents an oversimplified friend-foe dichotomy that fails to recognise the complexity of the Middle East conflict. You either have to be a supporter of the Palestinian cause or you’re labelled a Zionist, so the binary logic goes. The fact that it’s possible to both be for a Jewish state as well as believing in, for example, a two-state solution or an improvement of the catastrophic humanitarian conditions in Gaza, is completely ignored. The index also fails to address the fact that Israel isn’t solely to blame that a Palestinian state still doesn’t exist – not to mention the key role of the terrorist organisation Hamas in the continuation of the conflict. Instead, the Jewish state is demonised and delegitimised through double standards. And that is antisemitic. Where this line of argument leads is shown in a graphic shared by Index Palestine on Instagram: “A ceasefire is not the end of our work. It’s the true beginning!” – the group shared these words after Hamas fired thousands of rockets at civilian targets in Israel, killing 13 Israelis including two children. Index Palestine stylises their list as a continuation of this military conflict.

The denunciatory approach of the list is equally problematic: artists and cultural institutions are being “confronted” by the Index Palestine, as they write in the comments column of the list. They demand a clear position on the conflict in the Middle East. Those that fail to answer, are decried as silent supporters of a “colonial state” or even an “apartheid” regime. The fact that, for example, only five clubs and two theatres in the whole of Germany are listed exposes the arbitrary nature of the index. In reality, the vast majority of cultural institutions have no clear position on the conflict – and there’s absolutely no problem with that.

It doesn’t take much to land on Index Palestine’s list as a verified “pro-Zionist”. For the left-wing techno club ://about blank, an Instagram post “against all forms of antisemitism” following nationwide attacks on synagogues in the wake of the most recent escalation in the Middle East conflict was sufficient. The club criticised the very open hatred of Jews and Israel-related antisemitism on the streets of Germany – from both the political left and the right. For Index Palestine, this was apparently a no-go. For the Volksbühne, the bar was set even lower: two small heart emojis under ://about blank’s post are the reason why the legendary Berlin theatre, currently without an artistic director, landed on the list as a fact-checked “pro-Zionist”.

Other entries on the list are even bizarrer: “Clubkultur retten!” (In English: Save club culture!), a small online campaign that was founded during the pandemic for a quick reopening of the club scene and which posts videos of controversial raves in Berlin’s Hasenheide, has also been targeted by Index Palestine. The evidence: a link to a photo of one of the aforementioned park raves, which has absolutely nothing to do with the Middle East conflict. In the comments column of the table, the campaign is accused of having “supported” ://about blank’s Instagram post with a comment. Again, the comment in question was a heart emoji. The entry is considered fact-checked by Index Palestine.

Sulu Martini, a member of the 14-strong club collective, is saddened that ://about blank’s post against antisemitism is now being targeted by the BDS movement. “We considered our words very carefully, also hoping to avoid any false interpretations”, he told Belltower.News. Martini criticises that there is little room for preciseness in the heated atmosphere surrounding the Middle East conflict. Instead, there is a pressure to pick sides: “Everyone who refuses to take an unequivocal stand against Israel is suspected of pro-Zionism. Although we haven’t taken a position on the actual conflict between Israel and Palestine for good reasons, only against antisemitism in its various manifestations in Germany, ://about blank has become a screen onto which some project their delusional ideas.” The list’s aim is denunciation and stigmatisation, not education around the conflict, he added. For Martini, however, the list is absurdly almost a consolation of sorts, since the aggression of such “Israel critics” is vented at a left-wing techno club for once – and not a synagogue.

After a pandemic-induced dance-break, ://about blank would rather be preparing for its long-awaited reopening, Martini explains. But the recent escalation in the Middle East conflict has also had an impact on the Berlin club: “For us, this is a discursive setback, and it also weighs heavily on an emotional level after we’ve now been closed for so long”, Martini said. Conciliatory and mediating voices in the debate are being increasingly drowned out – and the dynamics of separation and prejudice only continue to increase in their impact and ugliness, Martini added. “The space for debate without being forced onto clear sides is dwindling. But it’s precisely within this nuanced space that we want to continue partying.”

The Leipzig club Institut für Zukunft is also critical of being named on the list. “We’re listed because we shared a call for a demo in solidarity with Israel”, Neele, a booker and resident DJ of the collectively organised club, explained to Belltower.News. The demo in question was a counter-demo to a “Free Palestine” demo in the wake of the Israel-Gaza conflict in May 2021. “The counter-demo quickly proved its necessity, especially in retrospect”, Neele continued. On social media, antisemitic slogans and hostility against the club were rife: Instagram users trivialised the Holocaust or announced their intentions to boycott the club. At the counter-demo, demonstrators were even attacked.

For years, the anti-Israel BDS movement has been trying to gain a foothold in the cultural scene. With the online campaigns #ArtistsForPalestine, #DJsForPalestine and #MusiciansForPalestine, artists have called for a boycott of Israel and announced that they will no longer perform in the Jewish state. On social media, artists and musicians face considerable pressure to join the campaign – often in an aggressive and confrontational fashion.

This has a very real impact on the cultural scene and Jewish artists in particular: In the summer of 2018 after a successful BDS campaign, around 20 artists cancelled their appearance at the Israeli Meteor Festival at short notice – an independent festival that subsequently ran into financial difficulties. Israeli clubs report that international DJs no longer want to perform there “for political reasons” (see Haaretz). The polarising strategy of the BDS movement has also had consequences for the scene in Germany: in 2019, the Palestinian Campaign for the Academic and Cultural Boycott of Israel (PACBI) called for a boycott of the techno clubs ://about blank, Conne Island and Golden Pudel – because of their critical stance on the BDS movement and their solidarity with Israel.

The Index Palestine is likely to have a similar effect: structures and scenes that have been built up over decades can be destroyed overnight through an oversimplified “criticism” of Israel expressed through Facebook polemics. This won’t help Palestinians. But it will damage a critical art scene. 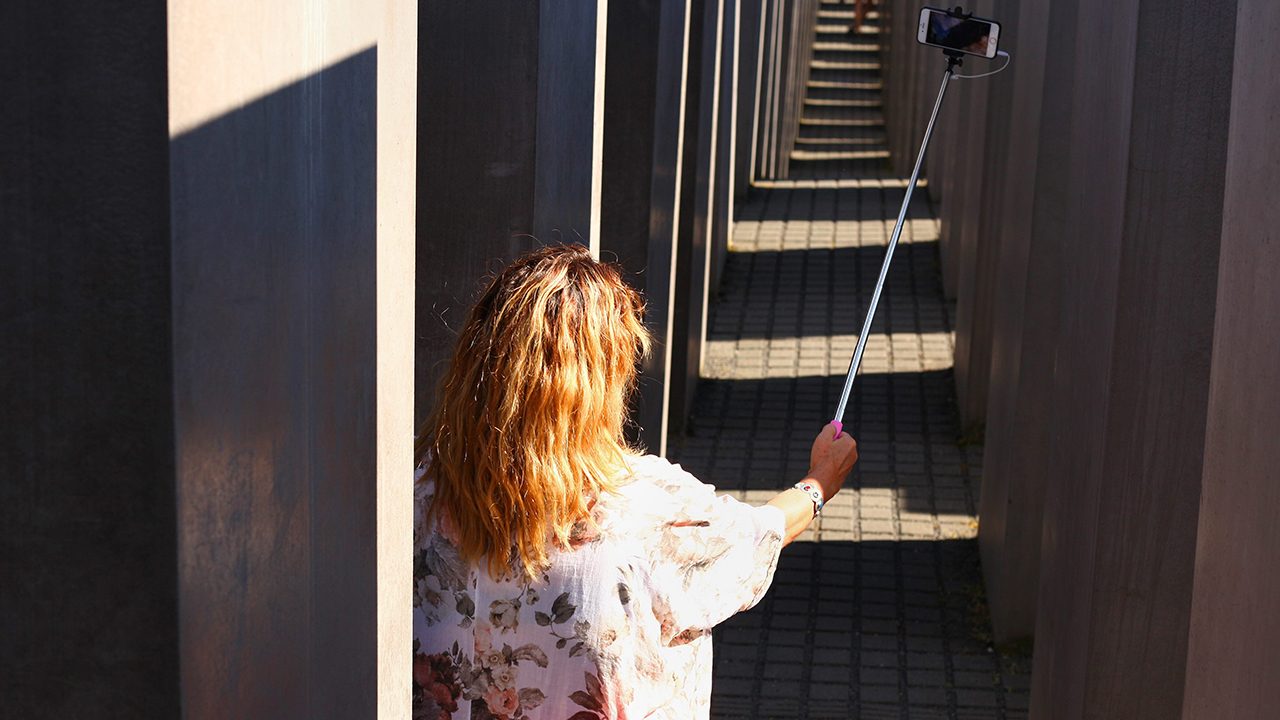 With the number of living first-hand witnesses of the Shoah diminishing, digital formats are becoming increasingly important as a resource for remembrance. However, that’s easier said than done – particularly on social media, as trends such as the so-called “Holocaust Challenge” on TikTok and people taking selfies in Auschwitz show.