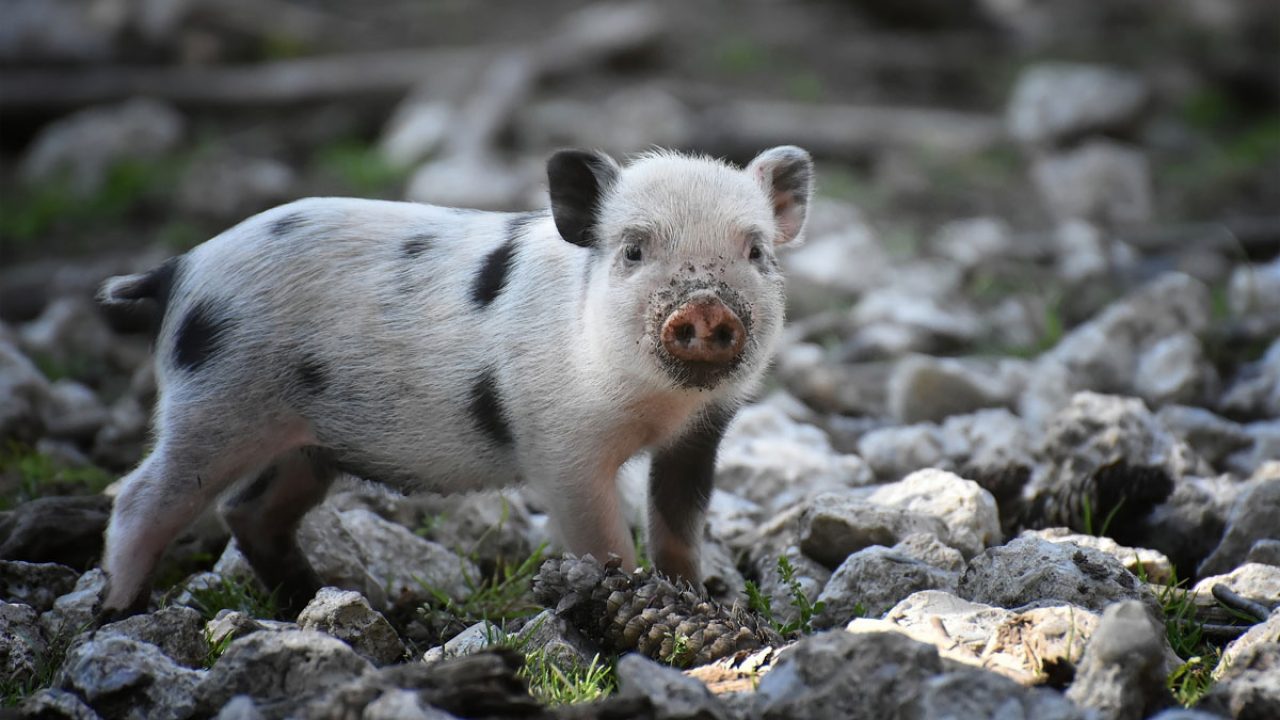 On July 23rd, 2019, #pork was the number one trending Twitter hashtag in Germany. The reason? Two private nursery schools in Leipzig announced they would no longer offer pork on their lunch menu because of two Muslim students who attend the school.

Parents learned about this decision via a letter—which mysteriously found its way to the editorial office of the German tabloid BILD. At the tabloid, someone was either outraged or reasoned that sensitive decision combined with widespread Islamophobic and nationalist resentment would generate clicks, and made it into a story. Soon, the story was on the cover of BILD’s nationwide edition, with a headline reading, “Out of concern for ‘salvation’: nursery school strikes pork for all children.”

Online, the story is posted behind the pay wall on BILD’s website, which means that Islamophobia and resentment are being used to make money. Unfortunately, the plan is working; on Facebook alone, the post had as many as 19,000 interactions and the hashtag #pork has exploded on Twitter. Numerous other media outlets picked up the story.

Anyone with a child at a German kindergarten knows this is a non-event. It goes without saying that nursery schools consider the special nutritional needs of the children in their care as best they can. If a child is allergic to nuts, nuts are off the menu. If someone made a fuss about that, they would be regarded as inconsiderate and rightfully so.

In general, pork is rarely found on the menu of nursery schools since the swine flu outbreaks and for health reasons. For health reasons, as well as financial and practical considerations, many nurseries offer more and more vegetarian food (see Watson). Similarly, the alleged ban of gummy bears (which are often made with pork hoof, and are therefore not halal) is even less relevant because nurseries generally follow a strict ban on sweets for health purposes. It only becomes an issues on birthdays or celebrations.

Obviously, the discussion about pork is neither about food, nurseries or children’s welfare. The online outrage and threats against the two Leipzig nurseries became so intense it prompted police to visit and monitor the security situation at both locations.  This shows how little regard people involved in the online discussions actually have for children, as police had to investigate potential attacks on the kindergartens.

Moreover, the discussion about the “Islamisation” of Germany and so-called German Leitkultur (dominant or guiding culture) apparently has manifested itself into pork itself. The participants in the debate seemed to care little that the alleged “Islamisation” was never suggested by either the Muslim students or their parents. More than anything, it is about being what it means to be “German” versus a “foreigner” – and people’s understanding of democracy when it comes to the majority and the protection of minorities. 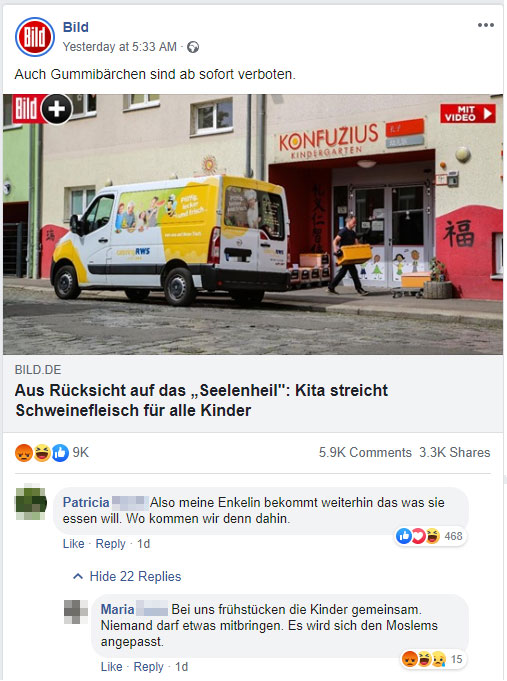 Well, my granddaughter will still get what she wants to eat. What is this world coming to! – Patricia
At our place, the children have breakfast together. Nobody is allowed to bring anything. We all adjust to the Muslims. – Maria

Here, a practice that has been around since the 1990s, asking children not to bring anything for breakfast in order to keep out unhealthy food is projected exclusively onto the Muslim children as “Islamisation.” However, it is not the children’s diet that the people in the comment section are concerned with:

If you reflect about how people can seriously think a menu without pork will lead to the end of Christmas, it is exactly the narrative BILD is using about nursery’s holiday policy. The tabloid also claimed that Christian holidays are missing from the nursery calendar, a false claim that was later refuted by German watch blog BILDblog. In the nurseries’ intercultural calendar, Christian holidays are celebrated alongside Muslim, Jewish and Buddhist holidays.

Others, like Birgitt, are stylizing pork as something “our grandparents and parents achieved.” Not having pork in nurseries is perceived as losing their culture. The next comment further intensifies the argument using a slogan that is also popular with right-wing extremists: being a “guest in one’s own country.” Others agree:

Why being a guest is such a terrifying idea is illustrated by the discussion on #pork on AfD politician Beatrix von Storch’s Facebook profile shown further below.

One person deems it necessary to point out that the “civil rights activists” in the former GDR probably had different ideas:

Further postings emphasise the narrative of a growing “Islamisation”:

The narrative of plans for “re-education” for religious reasons can be found as well:

Some users admit freely that it is about more than the Leipzig incidents:

No matter how soberly the arguments are presented, the discussion comes down to this position: 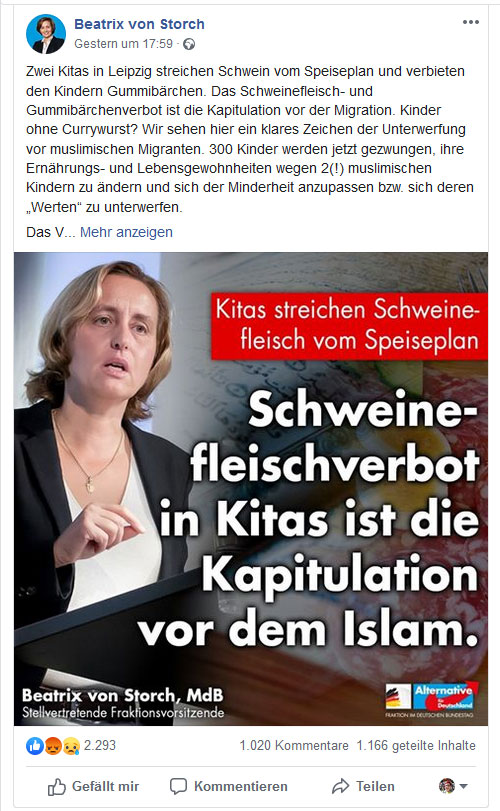 “Banning pork in kindergarten is surrendering to Islam.“

Two nursery schools in Leipzig are taking pork off their menu and banning gummy bears. Banning pork and gummy bears means surrendering to migration. Children without currywurst? We see this as a clear sign of submission to Muslim migrants. Three hundred kids are forced to change their diet and their way of life because of two (!) Muslim children and to adapt to a minority which means submitting themselves to their ‘values.’

She goes on: “The ban is not a sign of respectful co-existence but an act of submission. Elementary democratic principles are overturned by this minority’s demands. It is high time to oppose the madness. Mett rolls (raw minced pork), pork schnitzel and non-halal gummy bears are the norm in Germany – everything else is not normal and will never be normalized within the AfD. Whoever is not willing or able to adapt to our Leitkultur is free to enjoy their customs and norms – just not in our country.”

As expected, the discussions related to this post are not exactly productive. One user’s attempt at irony is not very well received:

A counter argument is brought up:

Democracy of course includes the protection of minorities, not the absolute decrees of the majority. However that seems to be a revelation in this environment.

According to this narrative, if you’re a Muslim you are a “guest” in this country. The double standard of what it means to be a guest is telling. In most circumstances, guests are given special treatment. Here, Franz wants the “guest” to adapt.

Is pork a manifestation of “German” culture? Numerous politicians from conservative parties have joined the discussion, arguing emotionally and without checking the facts (pork has not been “banned” but merely taken off a menu).

CDU in Saxonia tweets a share pic that reads: “Everyone is entitled to feed themselves as they see fit!” The picture itself however depicts chicken skewers instead of pork, which attracted some ironic comments. 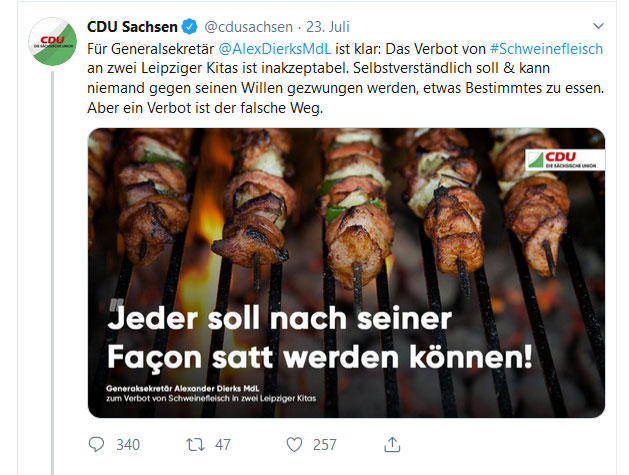 „Everyone is entitled to feed themselves as they see fit!“

Something similar happened to the Austrian right-wing populists – FPÖ, when their youth organization demanded:

“Every child should be allowed to enjoy a Schnitzel! If people don’t eat pork for religious reasons, fine, they don’t have to. But we won’t allow our children to be denied pork.” 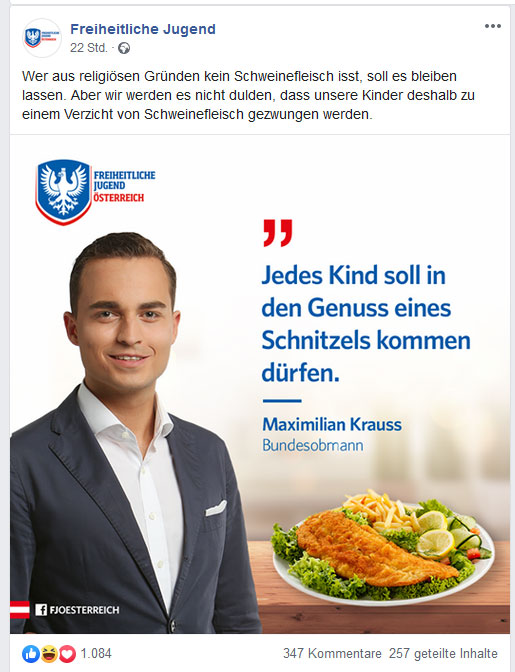 Meanwhile, the nursery schools in Leipzig have relented to the wave of criticism, largely due to the threats that they received. The management suspended the removal of pork from its menu until a PTA meeting at the end of the summer vacation – despite the fact that not a single parent actually complained, and even expressed positive opinions about the decision when speaking to the media. 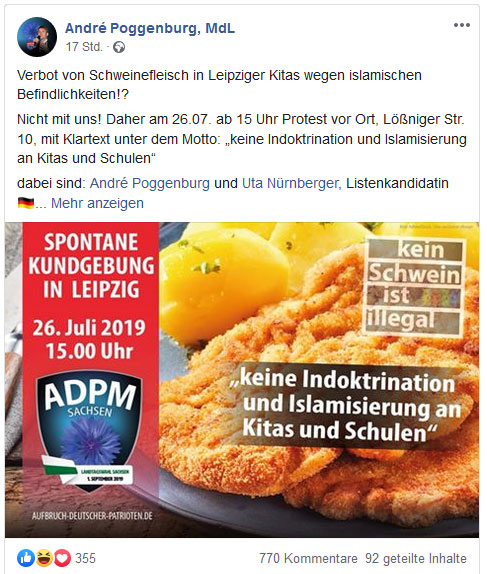 “No indoctrination and Islamisation in schools and preschools” – André Poggenburg, ADPM

The right-wing wing extremist scene, however, does not content itself with assurances by nurseries that children will continue to be allowed to bring salami sandwiches and gummy bears to school. Right-wing personalities like right-wing faction ADPM leader André Poggenburg are organizing rallies outside of nurseries (which have been subsequently cancelled) and continue to rail on social media.

Right-wing online personalities dealt with #pork in their own way, producing posts like this one by ex-policeman and vlogger Tim Kellner: 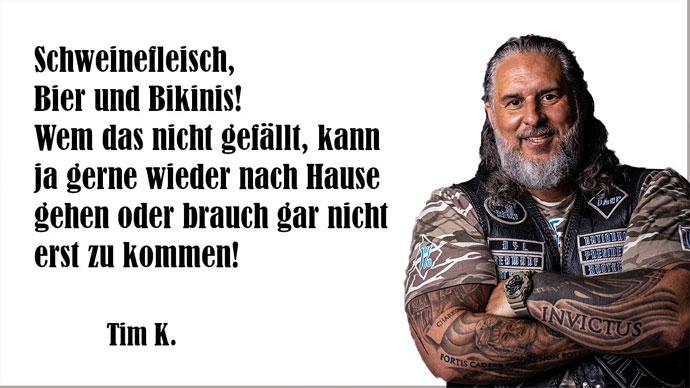 “Pork, beer and bikinis! If you don’t like it, you’re free to go home or don’t bother coming in the first place!” – Tim Kellner

“Perpetrators”? Does she consider people who take pork off a lunch menu to be criminals? Apparently so!

Anti-Muslim blog PI-News features an article by AfD MP Gottfried Curio. Its headline, as with many other articles, is devoid of fact and somehow sounds like he has already given up: “Curio: Sharia law – now it’s here.”

In the article itself, however, things start to get uglier. Curio explains that, in his opinion, forgoing pork in kindergartens is connected to jihad and Sharia law. “Now, the daily “mini jihad” has become reality, with migrants openly enjoying the peculiarities of their foreign cultures.”

Invoking terms like “shariah law” and “mini jihad” shows how more and more anti-Muslim groups are falling back on violent language, which invokes dangerous stereotypes.

The narrative by the far right “Identäre Bewegung” (Generation Identity) has become completely delusional. Their head, Martin Sellner, has seen his videos on YouTube which are partly blocked and currently not available:

“It’s not about pork, it’s about the act of submission,” Generation Identity leader Martin Sellner says in one of his YouTube videos (many of which are blocked). “It doesn’t matter if you call it replacement of the population, structural transformation or the Great Replacement.” Society should not rest easy just because the preschools revoked the “pork ban.”

“This has happened because we are only speaking about two Muslim girls. But what happens when it is more than 50% of the children? Then, the preschools cannot back-pedal. Then, it becomes an act of forced submission.”

In this article, we have brought many views about pork, a pork ban, assimilation and German identity to the table. Let’s end with a pie chart:

Who would really profit from a pork ban in preschools: 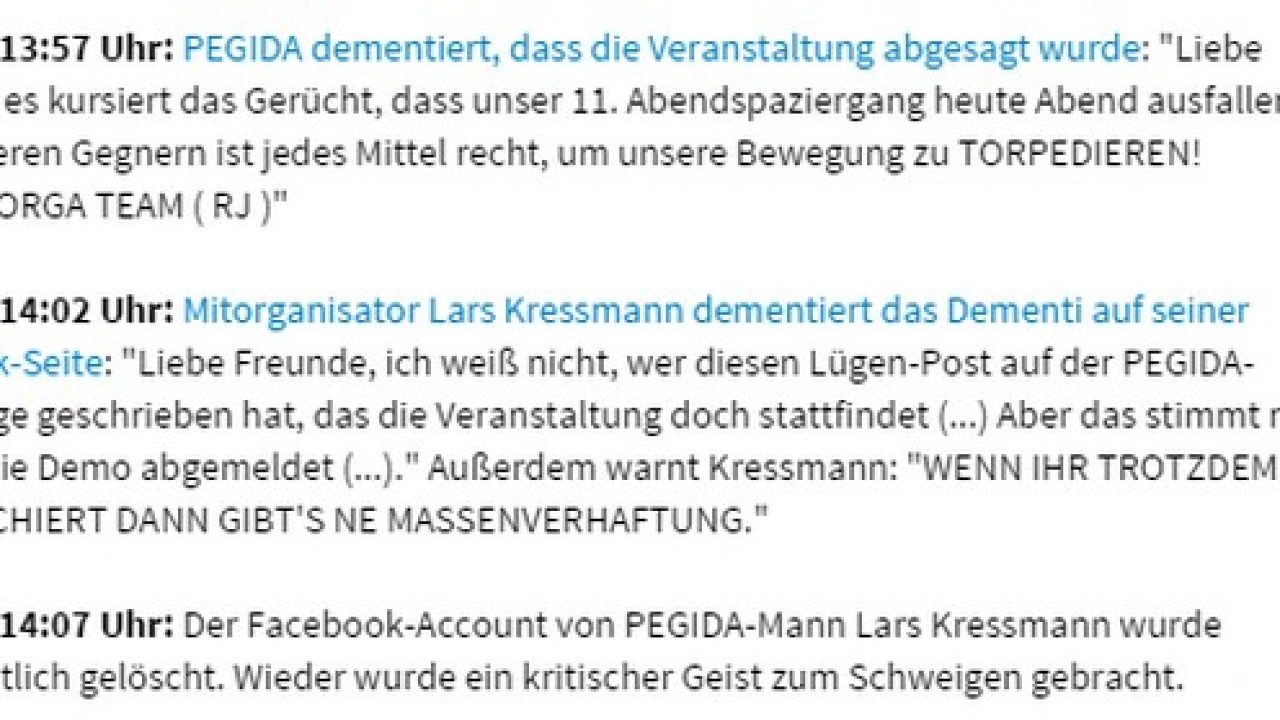 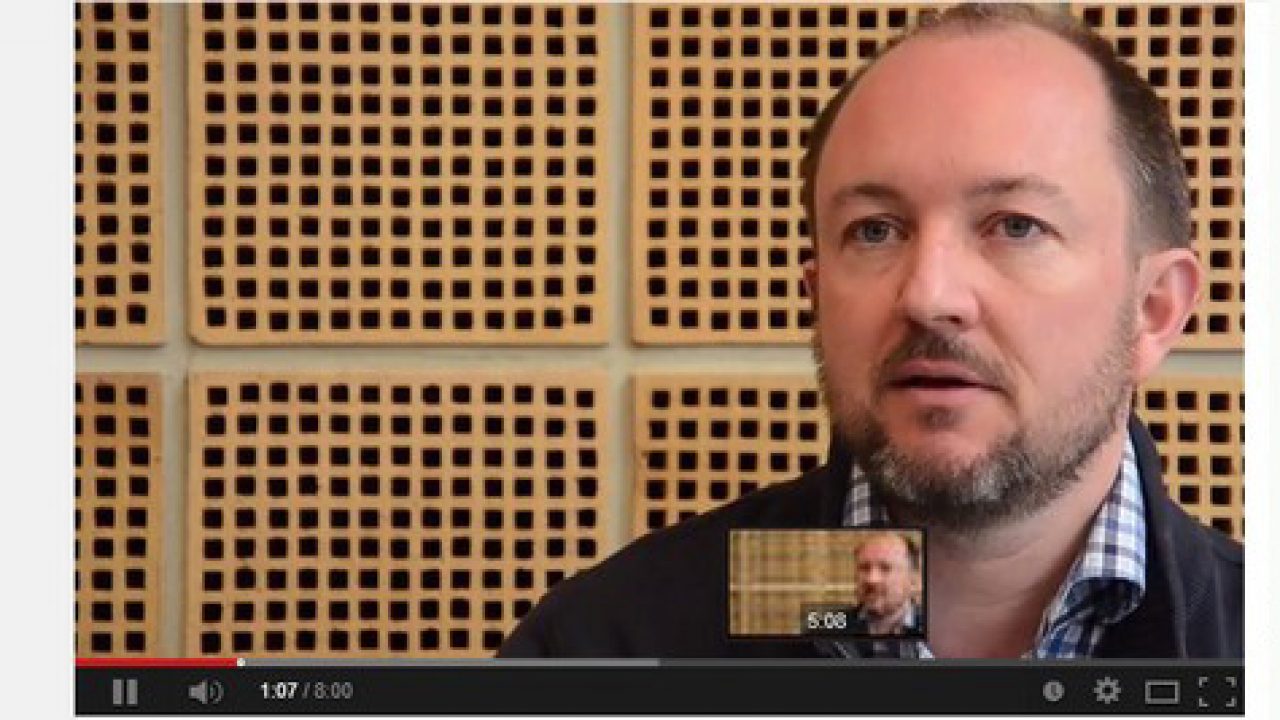 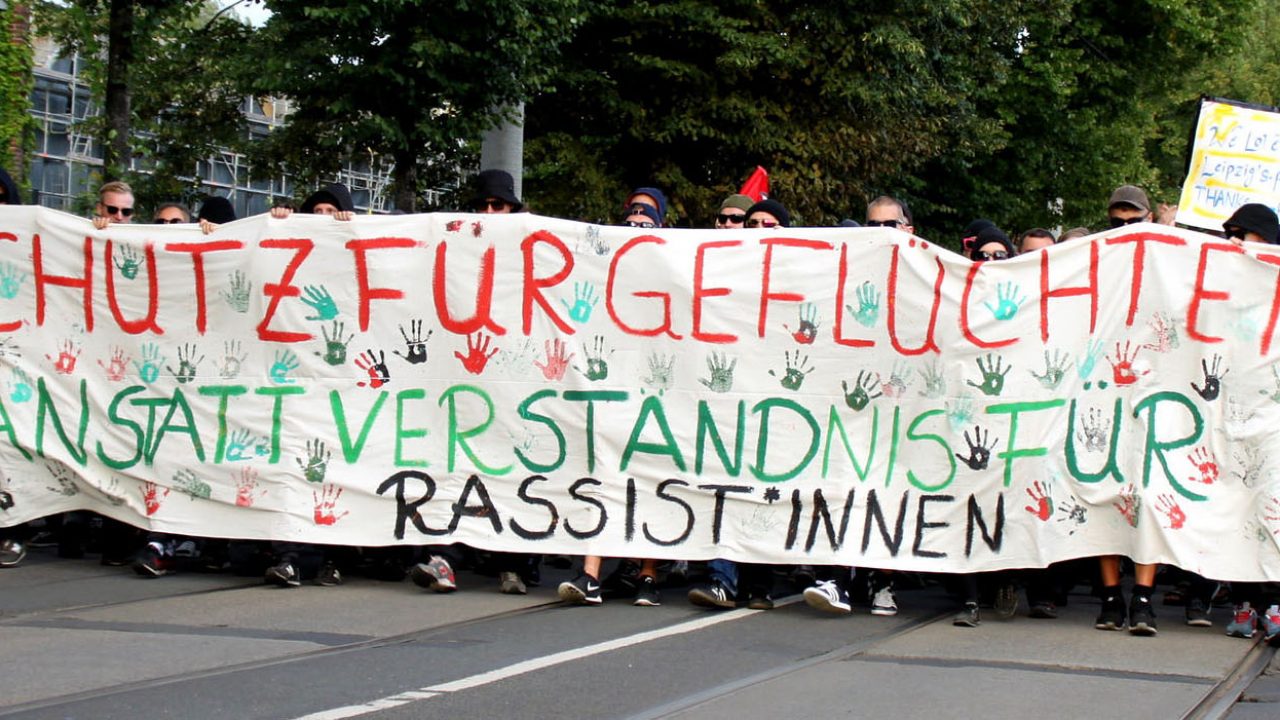